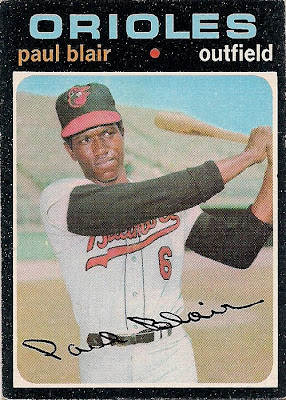 Who is the man: Paul Blair was in the midst of the peak part of his career in 1970, although a beaning during the season would lead many to speculate that he was never the same afterward.

Can ya dig it: I don't know where this photo was taken. It looks like one of those Arizona spring training sites. But the Orioles are a Grapefruit League team.

Right on: The Orioles have some terrific cards in this set. This is one of them.

You see this cat Blair is a bad mother: Blair was known as the premier fielding center fielder in the major leagues during his career. He won eight gold gloves, including seven straight.

Shut your mouth: I don't think that is possible. Blair's nickname was "Motormouth" because he wouldn't shut his mouth.

No one understands him but his woman: Blair insists that his hitting decline had nothing to do with the beaning but because Frank Robinson was traded away after the 1971 season. Robinson hit behind Blair and he saw plenty of fastballs with Robinson following him. 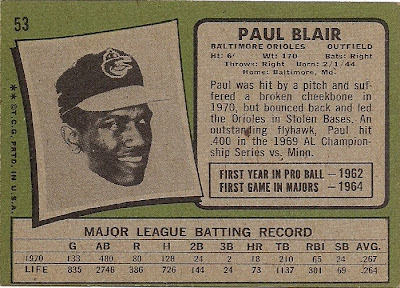 (A word about the back): The pitch that broke Blair's cheekbone (a different account has the pitch breaking his nose), was thrown by Angels pitcher Ken Tatum on May 31.
Posted by night owl at 2:29 AM