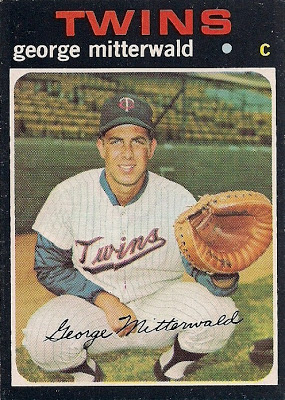 Who is the man: George Mitterwald had just enjoyed his first full season in the majors, appearing in 117 games for the Twins in 1970 and taking over the catching role from John Roseboro.

Right on: Out of those three, he looks the happiest on this card.

You see this cat Mitterwald is a bad mother: Before Dioner Navarro did it earlier this year, Mitterwald was the last Cubs catcher to hit three home runs in a game. And, according to this, he did it after partying a wee bit too much the night before.

Shut your mouth: I figured out on this post, that I'm apparently a leading authority on George Mitterwald baseball history. But really I'm not.

No one understands him but his woman: Mitterwald was the manager for Ila Borders, one of the first women to start a game in a men's professional baseball league, in 1997. Mitterwald moved Borders from the bullpen to the starting rotation and history was made. 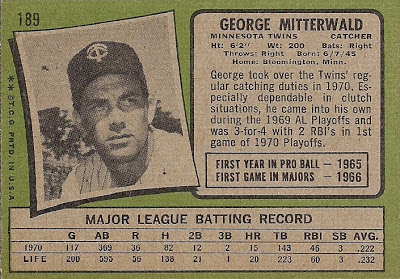 (A word about the back): Mitterwald's 3-for-4 performance in Game 1 of the 1970 ALCS was all for naught as the Orioles scored seven runs in the fourth inning and won 10-6.
Posted by night owl at 1:13 AM 4 comments: 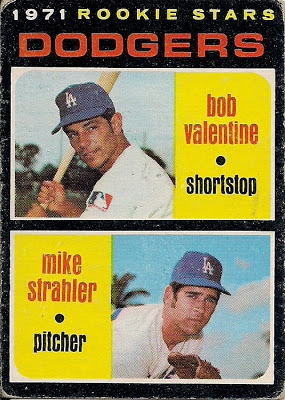 Who is the man: Bob Valentine and Mike Strahler tore up the Pacific Coast League in 1970 to win mention on this card. Valentine, who appeared in five games for the Dodgers in 1969, spent all of 1970 with Spokane and pounded out 211 hits with a .340 average. Strahler, meanwhile, won 15 games for Spokane and was called up to appear in six games with the Dodgers in 1970.

Can ya dig it: This card is rather scuffed up as I obtained it as one of my early 1971s as a teenager. An upgraded copy is in my Dodgers binder.

Right on: This is the only time on a Topps card that Valentine is referred to as "Bob." He's "Bobby" on every other card.

Shut your mouth: How many people have wanted to say that to Valentine over the years? Possibly the most vocal guy in baseball this side of Reggie Jackson.

No one understands him but his woman: Strahler played four years in the majors, all without one kidney. He was forced to have his right kidney removed when he was pitching in the minors for the Phillies in the late 1960s. 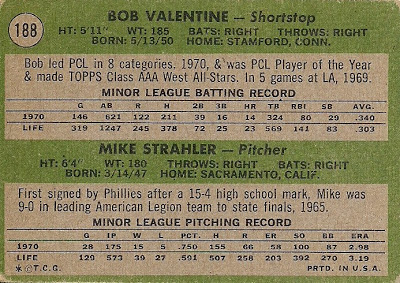 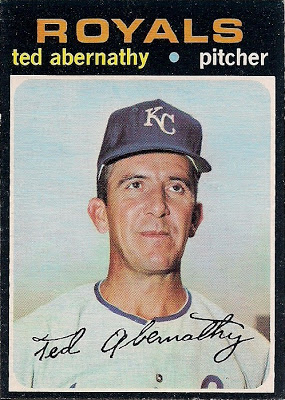 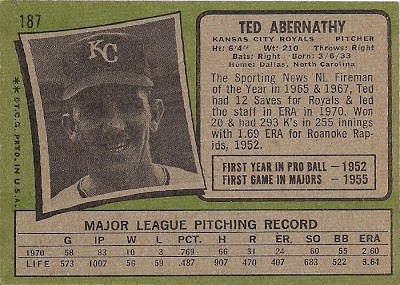 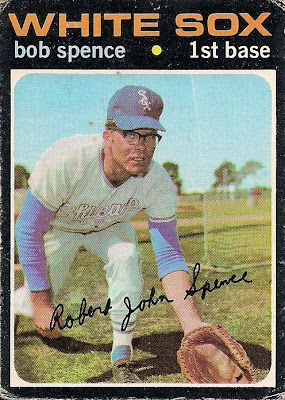 Who is the man: Bob Spence had just enjoyed the highlight season of his major league career. In 1970, he appeared in 46 games and gained 29 hits for a .223 batting average, all career highs.

Can ya dig it: This is the second straight card featured on this blog in which the player is wearing glasses. That can't happen too often.

You see this cat Spence is a bad mother: Spence was the No. 1 draft pick of the White Sox in 1967, the fourth pick overall in the draft that year.

Shut your mouth: Spence was involved in a trade with another famous glasses-wearer, Lowell Palmer of the Phillies (although Palmer's choice of specs were shades). In 1971, the White Sox sent Spence and Donald Bolt to the Phillies for Palmer.

No one understands him but his woman: Spence has an expression on his face that seems to say, "I hope they don't find out I'm not really a major leaguer." Spence would play only 14 more games in the big leagues after this card came out. And it would be his only card. 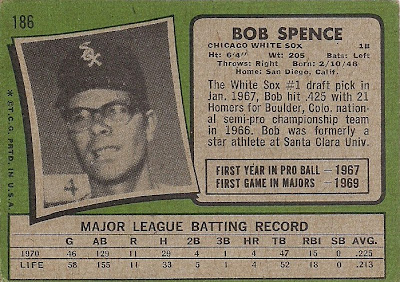 (A word about the back): Somewhere between 1971 and now someone uncovered an additional at-bat for Spence during the 1970 season. He is now listed as having 130 at-bats and an average of .223.
Posted by night owl at 2:15 AM 1 comment: 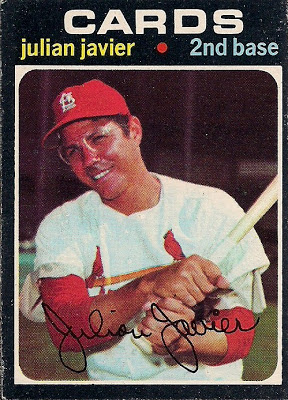 Who is the man: Julian Javier was entering his final season with the Cardinals after 11 memorable years with the club.

Can ya dig it: This is the fifth of five straight Topps cards of Javier swinging a bat gleefully. Really. He looks positively jolly on all of them.

Right on: I had Javier's 1969 Topps card as a youngster and his glasses fascinated me. It was so rare to see a ballplayer -- an infielder at that -- with glasses.

You see this cat Javier is a bad mother: Javier was involved in an incident in the Dominican League in which he struck umpire Emmett Ashford in the face twice after being called out on strikes. Javier was suspended indefinitely, but it was later cut to three days, prompting Ashford to resign.

Shut your mouth: Javier wore the No. 6 all the way until he came to the Cardinals and was given No. 25. When someone hassled him for getting No. 25, Javier said, "I think somebody else on this club has got six." That somebody was Stan Musial.

No one understands him but his woman: Javier's wife, Ines, married one major leaguer and gave birth to another. Stan Javier was named after Stan Musial. 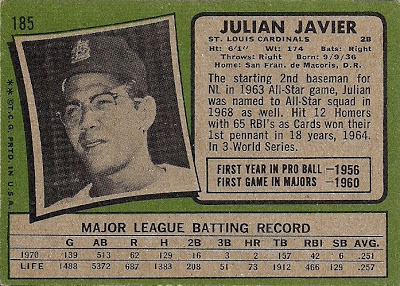 (A word about the back): Javier made just one pinch-running appearance in the 1964 World Series because of a hip injury. He fared much better in the 1967 and 1968 Series. 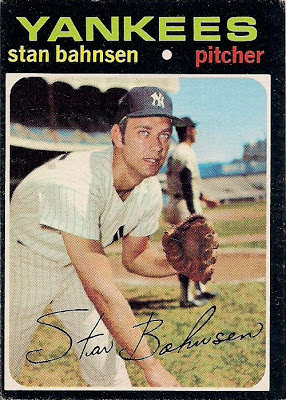 Who is the man: Three years removed from his A.L. Rookie of the Year award, Bahnsen was coming off a 14-win season entering '71 for the Yankees.

Can ya dig it: The guy standing behind Bahnsen intrigues me, but I have no hope of identifying him.

Right on: Bahnsen is not looking where that pitch is going.

You see this cat Bahnsen is a bad mother: During his rookie season, Bahnsen served in the Army Reserves and pitched only on weekends during that time. That seems like a lot to take on, Army service and your first full season in the majors on the hill in Yankee Stadium.

Shut your mouth: Bahnsen was involved in a fight with Vada Pinson of the Indians during the 1970 season. Bahnsen made a high tag on Pinson, who was trying to score on a wild pitch. The two players exchanged words and then Pinson dropped Bahnsen with a left hook.

No one understands him but his woman: According to this sabr account, Bahnsen's wife is a Red Sox fan. Bahnsen calls it "a mixed marriage." 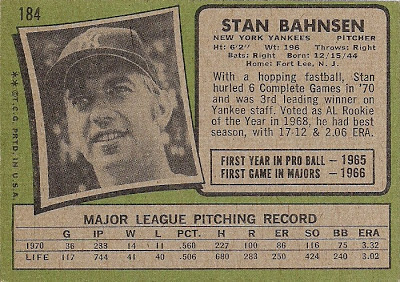 (A word about the back): Those 6 Complete Games were nothing. Bahnsen would throw 14 Complete Games the following season.
Posted by night owl at 11:46 PM 2 comments: 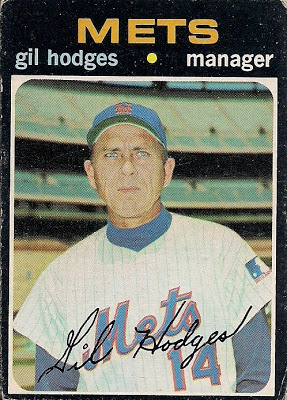 Who is the man: Gil Hodges led the Mets to a third-place finish one year after the team won the World Series in 1969. Sadly, the 1971 season would be his final season as a manager. He would suffer a fatal heart attack in April of 1972.

Right on: Hodges is no older than 46 in this photograph. That's scary to me.

You see this cat Hodges is a bad mother: Hodges was a powerful slugger for the Dodgers. For a time he held the National League record for both career home runs by a right-handed hitter and grand slams.

Shut your mouth: There's a famous moment in Hodges' managerial career with the Mets that took place during a game in July 1969. After seeing outfielder Cleon Jones fail to hustle after a ball, Hodges walked out of the dugout, onto the field, past the pitcher's mound and into left field. He led Jones back to the dugout and Jones didn't play the rest of the game. There is a video in which Hodges' wife and others talk about that incident, which some say turned the Mets into the Miracle Mets.

No one understands him but his woman: During an argument in which Hodges' wife, Joan, complained that he wasn't listening to her, she said, "I'm going to get uniforms for all the children, and I'm going to take the rugs out of this whole house and put Astroturf down. Maybe then I can have your undivided attention." 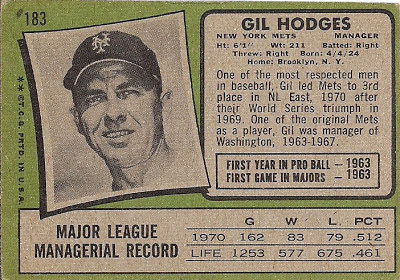 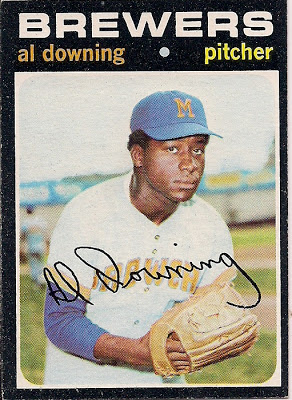 Who is the man: Al Downing was at a time of transition when this card came out. After five years of double-digit wins with the Yankees, he spent 1970 with the A's and Brewers, not having much success. He had been traded to the Dodgers by the time kids were pulling this card out of  packs.

Can ya dig it: Rare evidence that Downing was a Brewer! He spent only three months of his 17-year career with the team.

Right on: Downing does not appear very enthused about this photo session.

You see this cat Downing is a bad mother: Downing was the first black starting pitcher in Yankees history.

Shut your mouth: Downing is known for surrendering Hank Aaron's record 715th career home run. Downing has said that the moment doesn't define his career. "It was Henry's moment. It wasn't my moment," he said.

No one understands him but his woman: Downing was called "the black Sandy Koufax" when he pitched for the Yankees, but he never came close to matching Koufax, due to wildness and injuries. 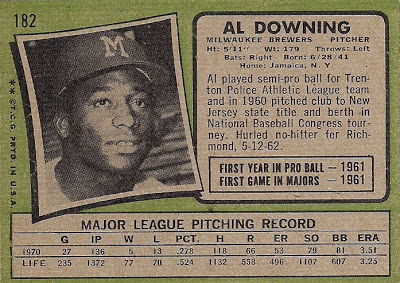 (A word about the back): Downing's 1970 numbers include both his A's and Brewers numbers. He went 2-10 for the Brewers that year, although he surrendered only 3.3 runs per game.
Posted by night owl at 2:36 AM No comments: 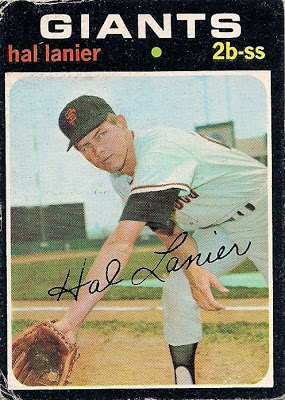 Who is the man: Hal Lanier was entering his last of eight seasons as a regular with the Giants. He'd play a lot less in the Giants' pennant-winning season of 1971 as Chris Speier would take over at shortstop, Lanier's primary position since 1966.

Can ya dig it: I'm not sure where Lanier is fake fielding, but unless it's the coach's box, the territory between the field and the dugout looks rather torn up.

Right on: Lanier is obscuring the Mets logo, but you can't miss old Shea Stadium.

You see this cat Lanier is a bad mother: Lanier won a NL pennant in his first year as a major league manager, leading the Astros to their first title in 1986.

Shut your mouth: When asked to describe his rookie manager in '86, colorful Astros reliever Charlie Kerfeld said: "He's what you call a red ass. He's fiery if you know what I mean."

No one understands him but his woman: Lanier married his wife, Mary, in spring training of 1986. He then managed the Astros to the National League West title, and when the Mets eliminated them in the NLCS, he then went on to his honeymoon to Hawaii. (A word about the back): The write-up and the career batting average are everything you need to know to call Lanier a "good-field, no-hit" infielder during his career. Yet between 1965-69, he averaged more than 150 games a season.
Posted by night owl at 12:39 AM 3 comments: