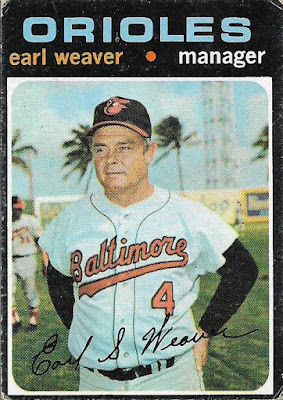 Who is the man: Earl Weaver just finished leading the Orioles to the only World Series title of his 17-year managerial career when this card was issued. The 1970 Orioles went 108-54 and mowed over the Twins and Reds to become world champs.

Can ya dig it: Four palm trees and a light tower in the background. I do dig it.

Right on: This is the first Weaver card issued in which you can see his waist. But Weaver never had much of a gut (all that arguing kept him fit), so the waist is a waste!

Shut your mouth: Weaver is third all-time in manager ejections with 94 total.

No one understands him but his woman: Weaver's first wife left him, saying, "Earl, the only thing worse than you being gone is you being home." His second wife, Marianna, was married to him until he died in 2013. 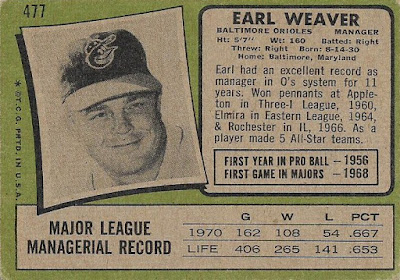 (A word about the back): All of those All-Star teams came in the minor leagues (or maybe the write-up is referring to Legion or high school ball) because Weaver never played in the majors.
Posted by night owl at 12:07 AM 4 comments: 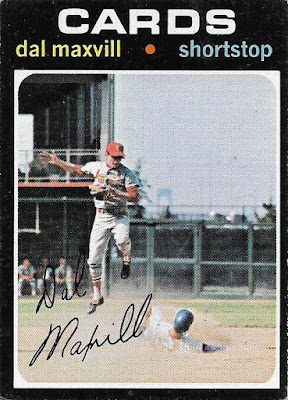 Who is the man: Dal Maxvill continued his reputation as a good-field, no-hit shortstop in 1970, playing in 152 games and batting .201 with zero home runs.

Can ya dig it: Oh, my goodness, this was one of my favorite 1971 cards as a kid. Viewing it then, Maxvill seemed at least 18 feet off the ground.

Right on: Still a wonderful early '70s card. So much going on over three-quarters of the photo and then absolutely nothing happening in the upper right quadrant.

You see that cat Maxvill is a bad mother: Maxvill played in five World Series during his career, three with the Cardinals and two with the A's.

Shut your mouth: Maxvill caught the final out to give the Cardinals the 1964 World Series over the Yankees.

No one understands him but his woman: Maxvill went 0-for-22 in the 1968 World Series, which set a record for the most Series at-bats without a hit. 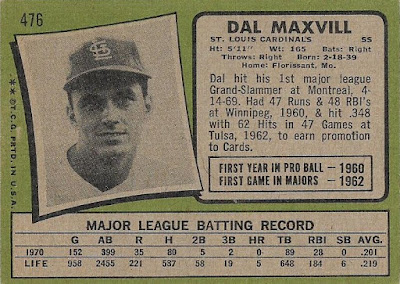 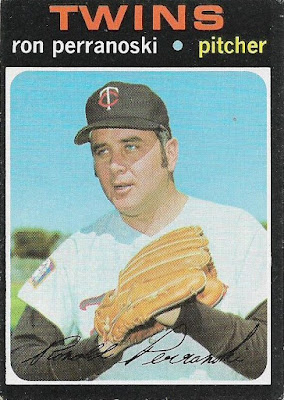 Who is the man: Ron Perranoski saved a career-high 34 games for the Twins in 1970. He finished seventh in Cy Young Award voting.

Can ya dig it: Perranoski is looking considerably chunkier in this photo than on his previous cards.

Right on: Perranoski may have a been a member of the Tigers when this card was issued. He was acquired off of waivers by Detroit at the end of July, 1971.

You see that cat Perranoski is a bad mother: Perranoski is forever associated with his 1963 season in which he went 16-3 as the Dodgers' main reliever, posting a 1.67 ERA in 69 games.

Shut your mouth: Perranoski was traded from the Dodgers to the Twins in a big offseason deal in 1967 that turned out quite well for Minnesota. The Twins dealt starter Jim "Mudcat" Grant and shortstop Zoilo Versalles to the Dodgers for Perranoski, catcher John Roseboro and pitcher Bob Miller. Grant and Versalles were key parts of the Twins' 1965 World Series team that played the Dodgers to seven games. But neither did well with L.A., while Perranoski and Roseboro were very productive for the Twins. When the deal was announced, Dodgers pitcher Don Drysdale made a reporter repeat it several times before he would believe it.

No one understands him but his woman: The offseason after Perranoski's big 1963 season, his wife filed for divorce. 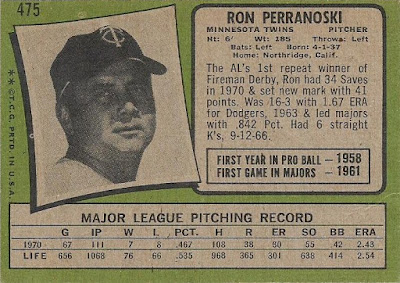 (A word about the back): Ah, the Fireman Derby. Today, nobody has any idea what "41 points" means. It was calculated by giving a reliever three points for a save, two points for a win, and negative two points for a loss.
Posted by night owl at 12:29 AM 3 comments: 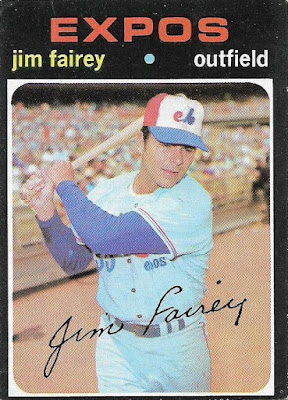 Who is the man: Jim Fairey had just finished his first full season with the Expos when this card was released. He played in 92 games for Montreal in 1970, batting .242.

Can ya dig it: The stands appear to be packed to see Jim hit.

Right on: This is Fairey's first card in an actual Expos uniform. In the 1969 Topps set, he's airbrushed out of a Dodgers uniform (one of those dreaded blackened caps from '69). He doesn't have a card in the 1970 set.

You see that cat Fairey is a bad mother: Fairey could be considered one of those 4A hitters. He beat the snot out of minor league pitchers, hitting over .300 three straight years in the Dodgers organization. But he batted just .235 in the majors.

Shut your mouth: Fairey was once called out while unconscious. The story goes that when Fairey was playing for Triple A Hawaii in the mid-1970s, he attempted to steal third base. The throw from catcher Larry Himes, hit Fairey in the ear, knocking him out. Gordy Coleman, the third base coach, grabbed Fairey instantly when he saw where Fairey was hit. When he realized that Fairey was unconscious, he laid him on third base, and the umpire ruled Fairey out because of coach's interference.

No one understands him but his woman: Fairey was often confused with Ron Fairly, another player who played for both the Dodgers and Expos. 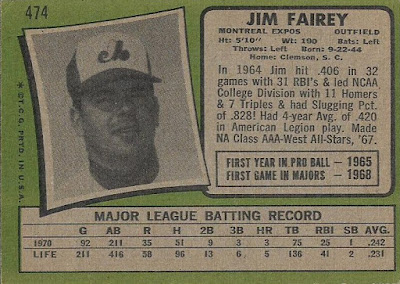 (A word about the back): "NCAA College Division" sounds redundant to me.
Posted by night owl at 2:02 AM 1 comment: 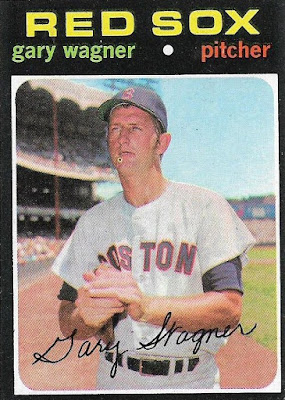 Who is the man: Gary Wagner completed his first full season with the Red Sox in 1970 after coming over from the Phillies in a trade in 1969. He appeared in 38 games, all in relief, and saved seven.

Can ya dig it: Final card!

You see that cat Wagner is a bad mother: Wagner's best season was his rookie year in 1965 when he went 7-7 with 91 strikeouts in 59 games and 105 innings pitched.

Shut your mouth: In a write-up in late January, announcing that Wagner would appear on a TV show in Bangor, Maine, a newspaper article closes with a quote from Red Sox manager Eddie Kasko, who says Wagner "will be around this ball club for a long while." Wagner was released by the Red Sox less than three months later.

No one understands him but his woman: I get Gary Wagner confused with 1960s White Sox pitcher Gary Peters (they are both Red Sox in this set). In fact, I nearly typed Peters' name instead of Wagner's four times in this post. I'm sure confusing a well-established pitcher like Peters with a sometimes major leaguer like Wagner makes me a whipper-snapper in the eyes of some fan from the 1960s. I don't care. In fact at my age, being called a whipper-snapper is kind of nice. 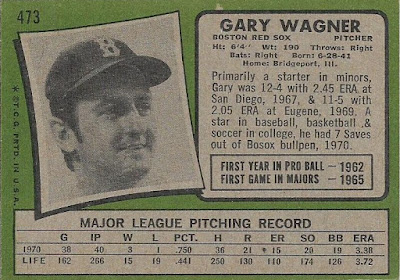 (A word about the back): It's always a little sad when the write-up mentions minor league performances that take place after the player's first game in the majors. 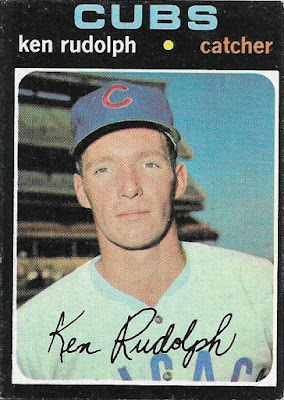 Who is the man: Ken Rudolph split his 1970 season between the majors and minors. On the Cubs, he was the catching backup to the backup (J.C. Martin) to the backup (Jack Hiatt). (FYI: Randy Hundley was the starter).

Can ya dig it: Not much imagination with this photo.

Right on: I like the look of that old-style Cubs cap.

You see that cat Rudolph is a bad mother: Rudolph was selected by the Cubs in the second round of the first major league amateur draft in 1965. He was chosen 26th overall. Meanwhile, Johnny Bench was selected 36th overall (To be fair, six catchers were drafted before Bench).

Shut your mouth: Rudolph was one of many major league players who left their teams in 1970 to serve required military duty. Terms of service ranged from two weeks in summer camp to weekend meetings with reserve units.

No one understands him but his woman: Rudolph was a high school baseball coach in Phoenix, Ariz., until recently. He retired two years ago. 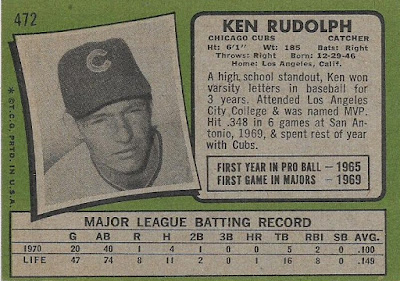 (A word about the back): I think those stats say he wasn't in the majors for his hitting. 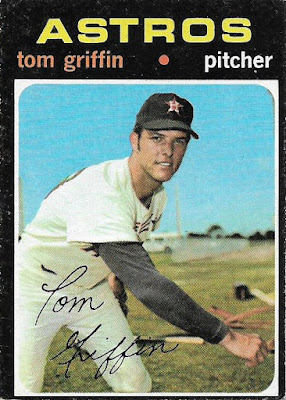 Right on: Are those bats on the ground behind Griffin or kindling?

You see that cat Griffin is a bad mother: Two hundred whiffs in your rookie year. It doesn't get much more bad-ass than that.

Shut your mouth: Griffin led the league in hit batters in back-to-back seasons, doing so in 1980 and 1981 while with the Giants.

No one understands him but his woman: Griffin was selected by the Astros in the first major league draft held in January. He was the fourth overall pick in January 1966, one of only 3 future major leaguers picked in the first round. 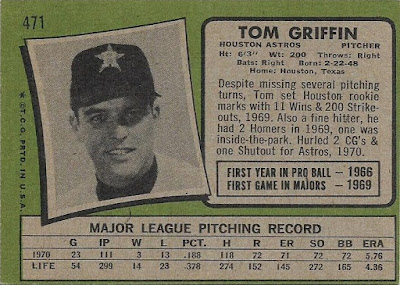 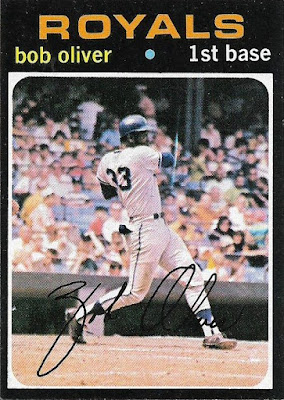 Who is the man: Bob Oliver enjoyed the best season of his career in 1970, setting career highs in virtually ever category.

Can ya dig it: Another action-packed Royals card (this is the sixth one). If I collected as a kid in 1971, I would have fallen in love with this one.

Right on: I even like the signature on this card. It has everything -- except you can't see the bat.

You see that cat Oliver is a bad mother: Oliver hit the first grand slam in Kansas City Royals history. It was on July 4th against the Seattle Pilots' Jim Bouton.

Shut your mouth: When Oliver was with the Angels in 1973, he told Jet magazine that what the team needed was "a black superstar" to draw fans. (The nearby Dodgers drew many more fans and featured several standout black players). Oliver didn't consider himself that superstar, but the Angels had just acquired an almost over-the-hill Frank Robinson from the Dodgers and he thought Robinson was that guy.

No one understands him but his woman: Oliver's son is Darren Oliver, the longtime lefty pitcher. Darren Oliver said that his mother, Hazel, worked a 9-to-5 job when Darren and his brother were kids. But when they played school sports, their mom was always there to watch. 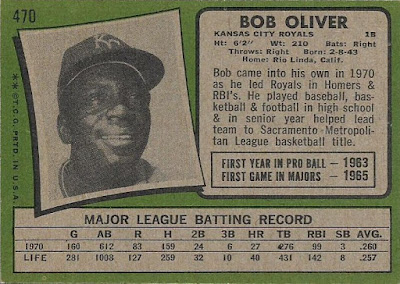 (A word about the back): Oliver's first major league appearance may have been in 1965 (three whole games), but he didn't make a return to the majors until 1969. 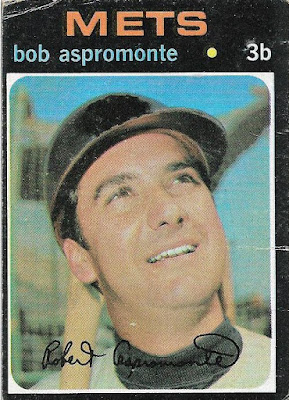 Who is the man: Bob Aspromonte played in just 62 games for the Braves in 1970, batting .213. After the season he was traded to the Mets for pitcher Ron Herbel.

Can ya dig it: Aspromonte appears to be trying very hard to see the blacked-out logo on his helmet. I'm assuming it's a blacked-out Braves logo, as Aspromonte is wearing a Braves helmet on his previous two Topps cards.

Right on: It is totally cool that Aspromonte spent most of his career with the Astros, and I know everyone agrees because he became known as "Aspro the Astro."

You see that cat Aspromonte is a bad mother: Aspromonte supplied the first hit and the first run in the history of the Houston franchise in 1962, when they were known as the Colt .45s.

No one understands him but his woman: Aspromonte was the last Brooklyn Dodger to retire. He managed one at-bat for Brooklyn in 1956. 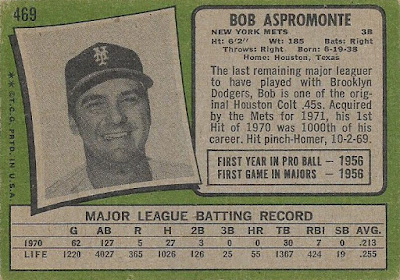 (A word about the back): Aspromonte's pinch-hit home run in 1969 came on the last day of the regular season. He was pinch-hitting for the pitcher Mike McQueen in the third inning, even though McQueen had given up just one run.
Posted by night owl at 2:31 AM No comments: