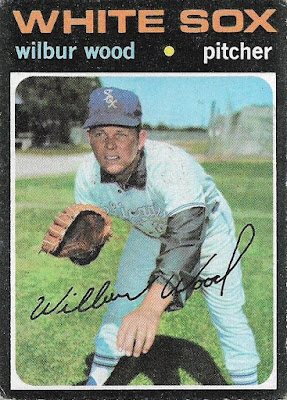 Who is the man: Wilbur Wood had just finished the last of three seasons in which he appeared collectively in 241 games for the White Sox. He averaged 80 appearances from 1968-70 and in 1971 he would become a starter and win 22 games.

Can ya dig it: What is that structure behind Wood's left shoulder, a mausoleum?

Right on: Wood looks rather formal with the collared look.

You see that cat Wood is a bad mother: Wood won at least 20 games four straight seasons between 1971-74.

No one understands him but his woman: Wood is the last pitcher to start both ends of a doubleheader, doing so on July 20, 1973 against the Yankees. He lost both games. 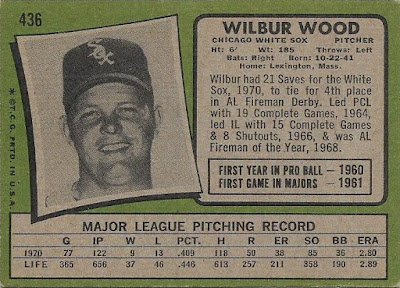 (A word about the back): I'm sure this isn't the first card to mention saves on the back, but it does make me wonder which card was the first.
Posted by night owl at 12:33 AM 2 comments: 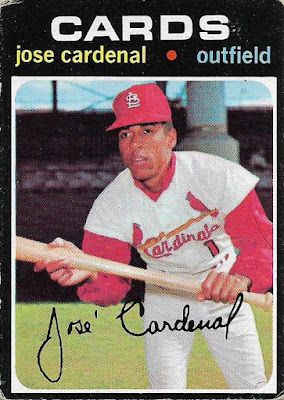 Who is the man: Jose Cardenal had just completed his first season with St. Louis when this card came out. He set career season-highs in hits, doubles, RBIs and OPS.

Can ya dig it: Cardenal is a long way from his power Afro days.

Right on: A Cardenal is playing for the Cardinals!

You see that cat Cardenal is a bad mother: Cardenal finished his career with 329 stolen bases and was second in the American League in the category in both 1965 and 1968.

Shut your mouth: Cardenal was known for coming up with bizarre reasons for not being able to play, causing Chicago columnist Mike Royko to call him "the immortal Jose Cardenal". Cardenal once famously said he couldn't play spring training games because one of his eyelids was stuck shut. (By the way this story has been retold many times, some with Cardenal having both eyelids stuck shut and others with him having his eyelids stuck open).

No one understands him but his woman: Cardenal and former Oakland A's shortstop Bert Campaneris are cousins. When Campaneris played all nine positions in a game in 1965, Cardenal was the first batter to come to the plate when Campaneris moved to the mound. 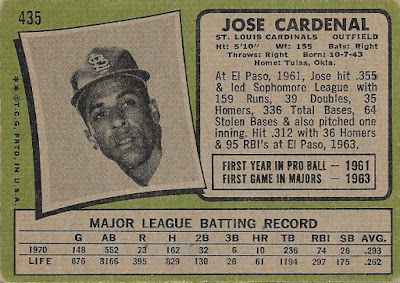 (A word about the back): The Sophomore League is an odd name. It was a Class D minor league that ran from 1958-61. A couple of the teams in that league  (Albuquerque, El Paso) later moved to the Texas League.
Posted by night owl at 12:57 AM 4 comments: 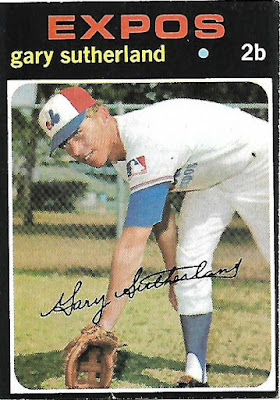 Who is the man: Gary Sutherland was on the downward slide after being the Expos' starting second baseman in their first year of existence in 1969. He lost some playing time in 1970 and hit just .206 in 116 games.

Can ya dig it: An Expos cap logo and a Major League Baseball logo? Good show.

Right on: I like the earlier Sutherland cards. Sutherland with a perm on his '75 and '76 cards is a little bit alarming.

You see that cat Sutherland is a bad mother: Sutherland and shortstop Bobby Wine turned a league-leading 110 double plays during the Expos' first season in 1969.

Shut your mouth: At age 9, Sutherland was California state champion as a roller skating figure skater.

No one understands him but his woman: Sutherland was the Tigers' lead-off hitter for most of the 1974 season. His on-base percentage that year was .282. 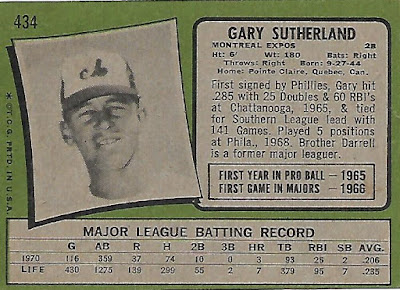 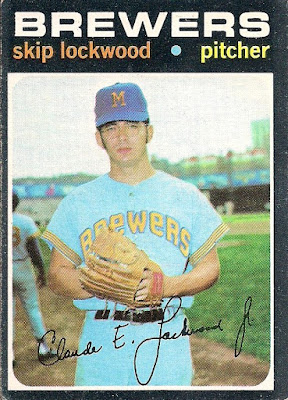 Who is the man: Skip Lockwood had completed his first season with the Milwaukee Brewers when this card first appeared in packs. He started 26 games in 1970, winning five, with a 4.29 ERA.

Can ya dig it: Lockwood is wearing glasses for the first time on his baseball cards. They won't appear again on a Topps card until the 1978 set, although he is donning glasses on his '76 SSPC card and a couple other oddball issues.

Right on: You can see there that Skip is actually "Claude". Skip's dad was named Claude, too.

You see that cat Lockwood is a bad mother: Lockwood came into his own when he converted to relief pitching around the 1974 season. He saved 19 games for the Mets in 1976, which was second-best in the National League (behind Rawly Eastwick's 26).

Shut your mouth: Lockwood began his career as a third baseman. In fact, on his first card, a four-player rookie card in the 1965 Topps set, his position is listed as "infield".

No one understands him but his woman: Lockwood's wife, Kathleen, wrote a book that was published in 2010, called "Major League Bride," which recounts the life of a major league wife through travel, trades and injuries. In fact, she left a comment on my 1975 Topps blog. 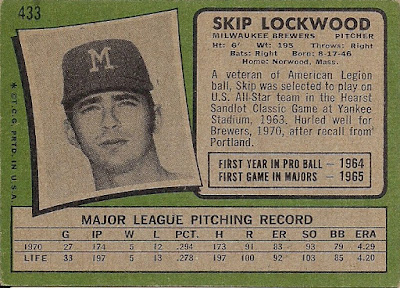 (A word about the back): The Hearst Sandlot Classic was an annual game played first at the Polo Grounds and then at Yankee Stadium. Backed by newspaper magnate William Randolph Hearst, the game lasted from 1946 to 1965, although similar sandlot games continued until 1970.
Posted by night owl at 1:06 AM No comments: 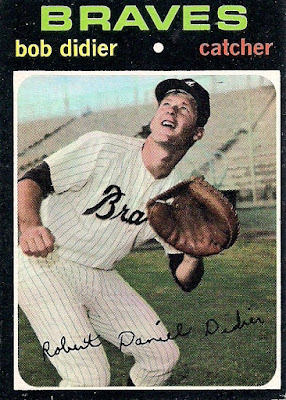 Who is the man: After being the Braves' primary catcher during their NL West-winning season in 1969, Didier fell way off in 1970, batting .149 in just 57 games.

Can ya dig it: I guess Didier is pretending to catch a foul pop-up here? He seems to have his glove awfully low.

Right on: I'd love to see a current player sign his full name on a card. ... and make it legible.

You see that cat Didier is a bad mother: Didier finished fourth in NL Rookie of the Year voting in 1969, behind just Ted Sizemore, Jose "Coco" Laboy and Al Oliver.

Shut your mouth: Didier's father is Mel Didier, the longtime coach, executive and scout. Mel Didier worked as an advance scout for the Dodgers in 1988 and was assigned to study the A's pitchers. He told the Dodgers that Dennis Eckersley, when facing a lefty with the tying or winning run in scoring position and a 3-2 count, would throw the batter a backdoor slider. Kirk Gibson, a lefty, hit an Eckersley backdoor slider on a 3-2 pitch with Mike Davis in scoring position for a two-run, walk-off home run in Game 1 of the 1988 World Series. Gibson has said that during his at-bat he could hear Didier's voice saying, "podnuh, as sure as I'm standing here breathing, you gonna get a 3-2 backdoor slider."

No one understands him but his woman: As recently as 2012, Didier was an instructor with Big League Experience Baseball Camp with more than 40 years of baseball experience to his credit. But he still can't match his dad, who is in his 80s and has been in baseball since the 1940s. 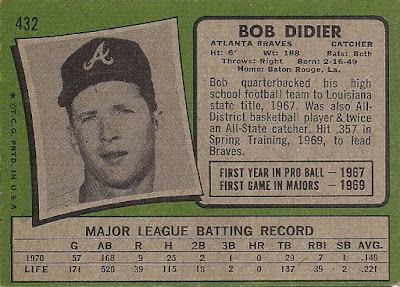 (A word about the back): One season dipping under .200, and the bio starts talking about other sports.
Posted by night owl at 12:52 AM 5 comments: 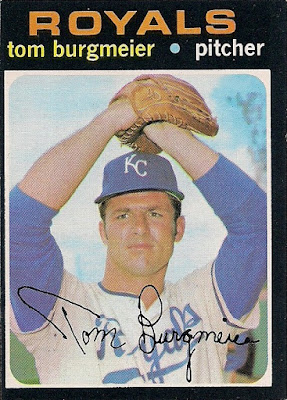 Who is the man: Tom Burgmeier, an original Kansas City Royal, had just completed his second season with the Royals, appearing in 41 games in 1970, all in relief.

Can ya dig it: I have no idea what that pattern in the top right corner is.

Right on: "Burgmeier" was entirely too close to "Burgermeister Meisterburger" when I was a kid.

You see that cat Burgmeier is a bad mother: Burgmeier set the Red Sox's lefty mark for saves in a season when he saved 24 games in 1978.

No one understands him but his woman: Burgmeier was signed by the brand new Houston Colt .45s in 1961. But after two seasons in the minors, the Colt .45s released him. 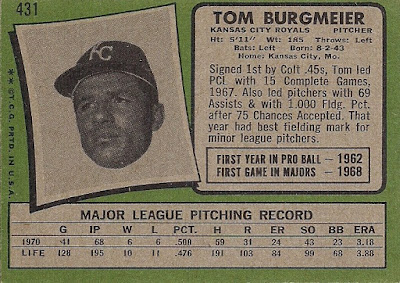 (A word about the back): "Chances Accepted" is a wonderfully formal and unnecessary phrase.
Posted by night owl at 12:51 AM 2 comments: 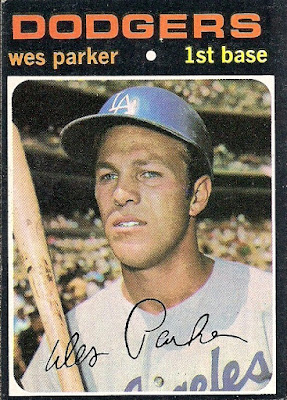 Who is the man: Wes Parker had the season of his life in 1970, finishing fifth in the NL MVP voting after hitting .319, knocking in 111 runs and hitting a league-leading 47 doubles.

Can ya dig it: This is one of the first 1971 Dodger cards I owned. I looked at his 1970 stats on the back and immediately wanted to know more about this Wes Parker guy.

Right on: That helmet on Parker's head makes this photo appear as if it was taken in the middle of a game. I really believe he's getting ready to hit.

You see that cat Parker is a bad mother: Parker won the Gold Glove award six straight seasons and in 2007 was named the first baseman on the all-time Gold Glove team.

Shut your mouth: Parker acted in several TV shows, movies and commercials, but his most famous acting role was as himself in the first season of the Brady Bunch in 1970. Parker plays the boyfriend of Greg's math teacher and says just a few lines.

No one understands him but his woman: Parker retired from the majors at age 32. Speculation on his abrupt departure has ranged from tiring of the baseball lifestyle and the Dodgers' continuous rebuilding ways, to players union friction. Parker was one of the few Dodgers who voted against a players' strike in 1972. 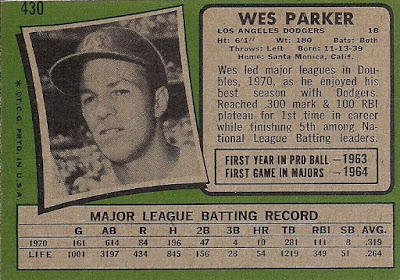 (A word about the back): That's the same photo on the back as the front. This makes me wonder how many times this has happened in the set so far, but I don't have time for that now. Maybe later.
Posted by night owl at 12:16 AM 4 comments: 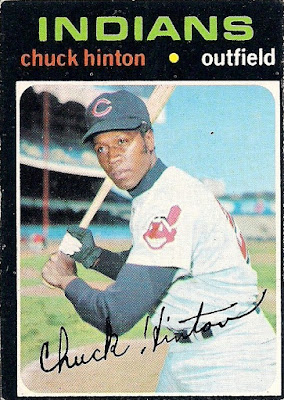 Who is the man: Chuck Hinton achieved the highest single-season batting average of his 11-year MLB career in 1970, batting .318 in 195 at-bats for the Indians.

Can ya dig it: Chief Wahoo and Yankee Stadium are on full display in this photo.

You see that cat Hinton is a bad mother: Hinton led the Washington Senators in stolen bases all four years he played for them, from 1961-64.

Shut your mouth: Hinton was hit in the ear by a pitch from the Yankees' Ralph Terry in 1963. He was carried from the field and hospitalized, but returned to play eight days later.

No one understands him but his woman: Hinton came up with idea for the Major League Baseball Players Alumni Association in 1982 after playing in a Super Bowl golf tournament sponsored by the NFL Alumni Assocation. 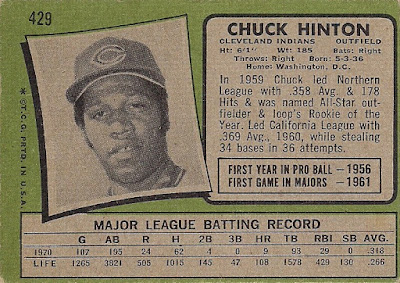 (A word about the back): 1970 was the first season that Hinton didn't steal a base. He didn't steal one in 1971 either. That's probably how he knew he was done.
Posted by night owl at 2:44 AM No comments: 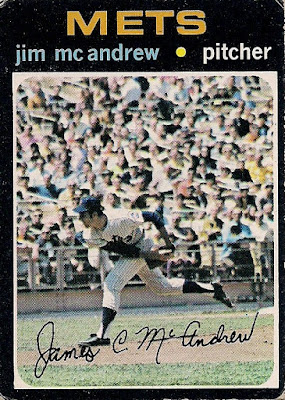 Who is the man: Jim McAndrew was coming off the most prolific season of his seven-year major league career, appearing in 32 games in 1970 and pitching in 184 innings.

Can ya dig it: This is an early favorite of mine from the '71 set. I acquired it in those early bunch of cards I landed in a trade as a youngster and I couldn't have been more thrilled with this card, even though I had no idea who he was.

Right on: The crowd makes the shot. It looks like a well-attended game.

You see that cat McAndrew is a bad mother: McAndrew began the 1972 season with a 9-3 mark for the Mets.

No one understands him but his woman: McAndrew pitched in 146 games for the Mets between 1968 and 1973 but didn't appear in a single inning in the Mets' postseason appearances in 1969 and 1973. 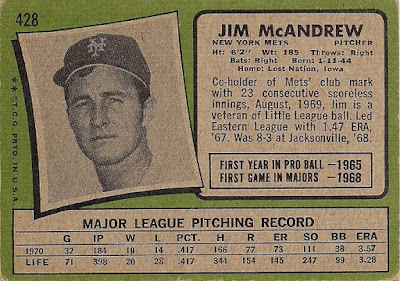 (A word about the back): "Co-holder of Mets' club mark with 23 consecutive scoreless innings, August 1969, Jim is a veteran of Little League ball." ... Those two things have nothing to do with each other.
Posted by night owl at 12:44 AM 3 comments: