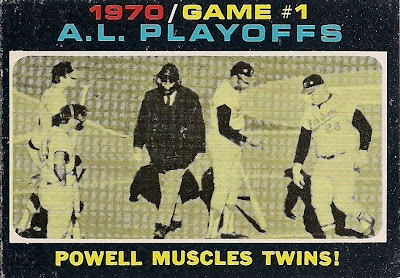 Who is the man: The man mentioned on this card is the Orioles' Boog Powell, who went 2-for-5 and hit a home run in the first game of the 1970 A.L. Championship Series against the Twins. Boog is the gentleman on the right.

Can ya dig it: I absolutely love the ALCS and NLCS cards in this set. The bright red, yellow and blue lettering on a black background, and the photos filtered in yellow (A.L.) and red (N.L.) captured my imagination when I first saw these as a kid. They were among the most coveted cards for me in the set.

Right on: Powell is being greeted by fellow Oriole Frank Robinson (who would strike out) as Twins catcher George Mitterwald looks on. The home plate umpire is Johnny Stevens and I'm guessing the other guy is the bat boy.

You see this cat Powell is a bad mother: The Orioles won the game 10-6. Powell was one of three Orioles to hit a home run in the fourth inning.

Shut your mouth: Powell was not the story in this game. The story was Orioles pitcher Mike Cuellar, who punctuated the Orioles' seven-run fourth with a grand slam home run, which turned his team's lead from 3-2 to 7-2.

No one understands him but his woman: Mitterwald was 3-for-4 with two RBIs in this game for the Twins, but it didn't mean a thing. 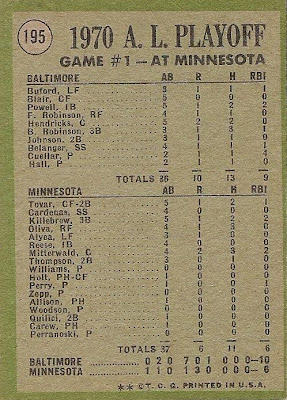 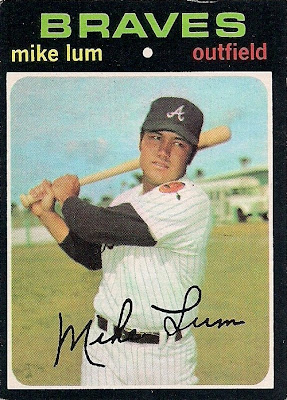 Who is the man: Mike Lum was entering his fifth season with the Braves in 1971. He was on the verge of becoming a regular outfielder for Atlanta.

Can ya dig it: A white school bus in the background! Terrific! (It's possible it isn't a school bus, but let's pretend it is).

Right on: Lum is posing with a bat in his hand on 8 of his first 9 Topps cards. The 1974 card is the only exception, as he's posing with a first baseman's mitt.

You see this cat Lum is a bad mother: Lum is one of six players to have pinch-hit for Hank Aaron (the others are Lee Maye, Johnny Blanchard, Johnny Briggs, Marty Perez and Mike Hegan). Lum batted for Aaron during a blowout of the Mets on May 22, 1969, hitting a double. At the time, it was reported that Lum was the first player to pinch-hit for Aaron, but that was untrue.

Shut your mouth: Lum's starting role disappeared after injury in the mid-1970s and he started backing up Earl Williams at first base. By 1975, he had it, saying in The Sporting News, "If that's the way they feel, they can get rid of me. I've kept my mouth shut for eight years now, but I'm sick and tired of all this."

No one understands him but his woman: Lum was the first American with Japanese ancestry to play in the major leagues. 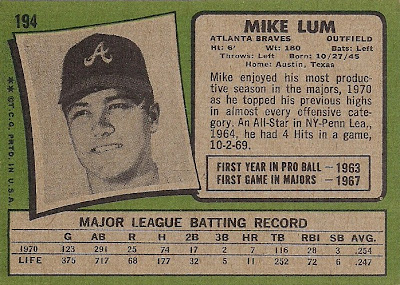 He doubled in the first inning, singled and drove in a run in the third, doubled to lead off the fifth, grounded out in the seventh, and then singled in the ninth. 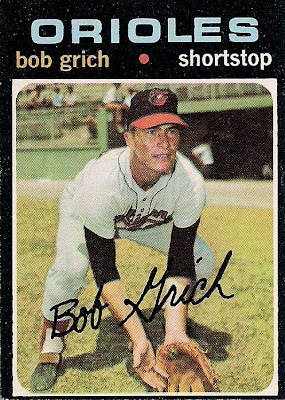 Can ya dig it: Rookie card!

Right on: It is very odd to see Grich without his trademark mustache. But he is not displaying a mustache -- that is noticable -- until the 1975 Topps set (he is in action shots on cards in 1973 and 1974 and it's too difficult to tell if he's 'stache-less or not).

You see this cat Grich is a bad mother: Grich had a competitive hot temper, especially when he first started playing with the Orioles. He even yelled at manager Earl Weaver a few times, which I'm sure was a sight.

Shut your mouth: Grich missed a good portion of the 1977 season -- his first with the Angels after signing as a free agent -- thanks to an injured back suffered while trying to carry an air conditioning unit up the stairs.

No one understands him but his woman: Baseball followers often refer to Grich as "Bobby." On his Fleer and Donruss cards, he's also usually referenced as "Bobby." But Topps stuck to calling him Bob (just as he signed his name here) on all his cards throughout his career. 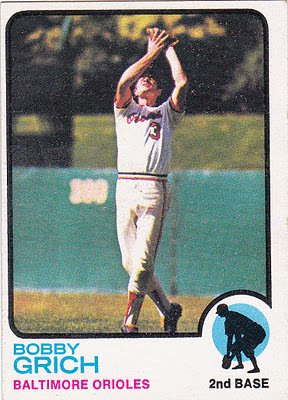 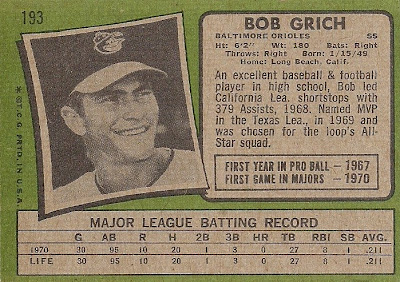 (A word about the back): The abbreviation of League as "Lea." twice for no apparent reason is odd.
Posted by night owl at 1:00 AM 3 comments: 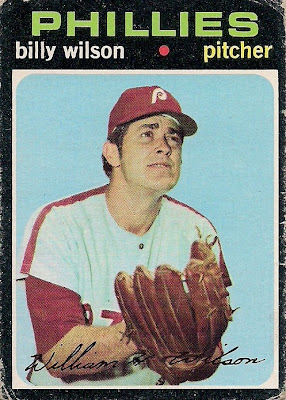 Who is the man: Billy Wilson was entering his third full season as a relief pitcher for the Phillies at the time of this card's release.

Can ya dig it: Wilson is referred to as "Billy" on all his Topps cards, but he was known as both "Billy" and "Bill" in newspaper accounts. Wilson made it no less clearer by signing his name here "William H. Wilson."

Right on: If Wilson looks a little old for this being just his second solo card, it's because he was 28 in 1971. He pitched in the Phillies minor league system beginning in 1962.

You see this cat Wilson is a bad mother: Wilson once played third base in a major league game. On Aug. 6, 1971, Phillies manager Frank Luchessi moved Wilson from the mound to third base so reliever Joe Hoerner could come in to face the Pirates' left-handed slugger Willie Stargell. Hoerner struck out Stargell and Wilson returned to the mound. The Phillies wouldn't have another pitcher play another position in a game until 2010 when Roy Oswalt was placed in left field after Ryan Howard was ejected during a 16-inning loss to the Astros.

Shut your mouth: Wilson underwent three arm operations while he was trying to make the major leagues.

No one understands him but his woman: Wilson pitched his first three seasons in the minors as a starter. He was then converted to a reliever and in 179 games in the majors, never started a game. 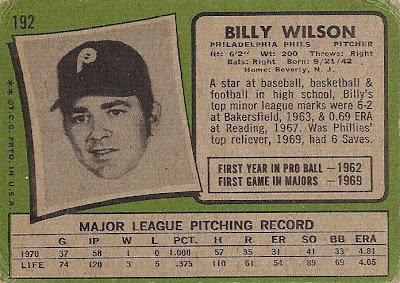 (A word about the back): Second straight floating head!
Posted by night owl at 9:43 AM 2 comments: 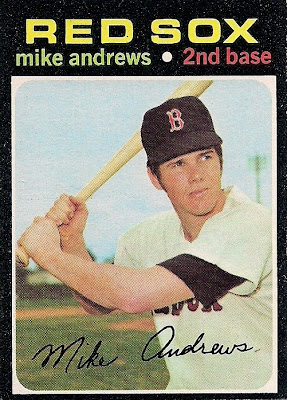 Who is the man: Mike Andrews had completed his fourth and final season with the Red Sox in 1970 and had been traded to the White Sox by the time this card appeared in packs. Andrews was dealt in the trade that brought Luis Aparicio to the Red Sox. Aparicio appears later in the set with the Boston.

Can ya dig it: Well, I'm digging that the '71 Topps blog is back. I apologize for the hiatus. Scanner issues.

Right on: I don't think I've mentioned this yet: When '71s are in almost-out-of-the-pack condition, there is no finer-looking card.

Shut your mouth: Andrews committed 74 errors in 114 games during his first season in pro baseball with Olean in the New York-Penn League in 1962. Wow.

No one understands him but his woman: My first knowledge of Andrews was reading about his infamous final moments as a major league player. After committing two errors against the Mets for Oakland in Game 2 of the 1973 World Series, A's owner Charlie Finley forced Andrews to sign an affidavit saying he was disabled and couldn't play. The public outrage helped return him to the lineup for Game 4, but after grounding out in a pinch-hit appearance, Finley demanded him benched for the rest of the Series. 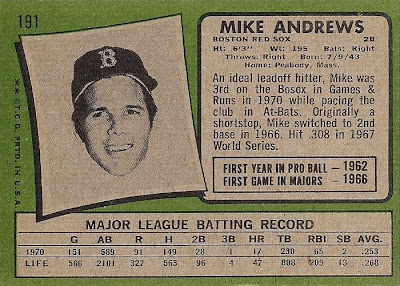 OK, let's see what that entailed in 1970, besides the mentioned being third on the team in games played and first in at-bats. 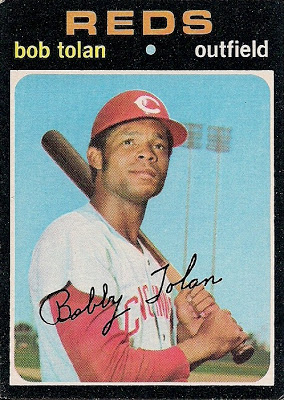 Who is the man: Bob Tolan had completed his second season with the National League champion Reds, leading the league in steals (and also caught stealing). Around the time this card was created, he was rupturing his Achilles tendon playing basketball, which would prevent him from playing the entire 1971 season.

Can ya dig it: I've always dug cards of players featured with batting helmets. From an early age, I viewed batting helmets as cooler than regular caps.

Right on: This card unfortunately does not feature Tolan's unique batting stance, which is shown on a number of his other cards (1972, 1973 and 1977 Topps in particular). Tolan held his hands so high that they would be parallel with the top of his head.

You see this cat Tolan is a bad mother: Tolan was always in trouble with the Reds. The basketball injury violated his contract. Then, two years later, he went AWOL and grew a beard, violated Reds team policy and Cincinnati suspended the bad-ass for the rest of the season.

Shut your mouth: During the 1973 season, Tolan picked a fight with Dodgers outfielder Willie Crawford. The two were both L.A. natives and longtime friends. Crawford was offering help to Tolan, who was struggling at the time. But Tolan would have none of it.

No one understands him but his woman: Tolan signed his name "Bobby" and he was known as "Bobby," but Topps insisted on calling him "Bob" on all of his cards. 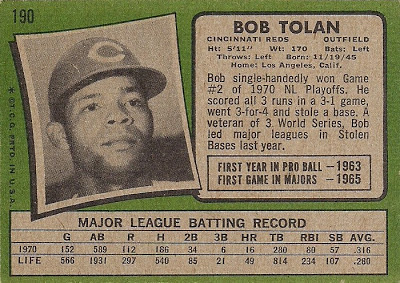 (A word about the back): Tolan hit a home run in that Game 2 of the 1970 NLCS, and it gets shunned for a mention of his stolen base.