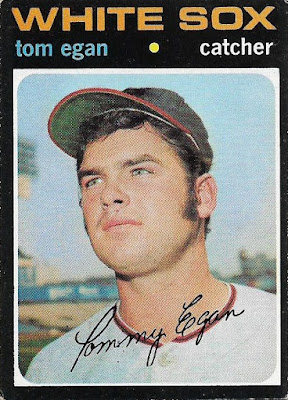 Who is the man: Tom Egan spent the entire 1970 season with the Angels, but was traded on Nov. 30th, along with outfielder Jay Johnstone and pitcher Tom Bradley, to the White Sox for outfielder Ken Berry, infielder Syd O'Brien and pitcher Billy Wynne.

Can ya dig it: Egan is decked out in an Angels uniform in this photo.

Right on: Egan's sideburns are quite a bit longer here than on his 1970 Topps card.

You see that cat Egan is a bad mother: Egan hit two home runs off of the A's Catfish Hunter during the 1969 season. He hit just five total during the season.

Shut your mouth: Egan was beaned by the Tigers' Earl Wilson in 1969 and suffered a broken jaw. He never completely regained sight in his right eye after the incident.

No one understands him but his woman: Egan made his major league debut as an 18-year-old in 1965. He struck out to end the game. 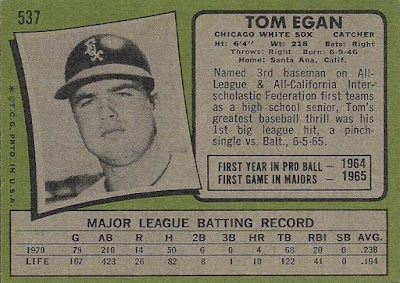 (A word about the back): I'll venture a guess and say that Tom's greatest baseball thrill got an update when he caught Nolan Ryan's third career no-hitter in 1974.
Posted by night owl at 12:01 AM 3 comments: 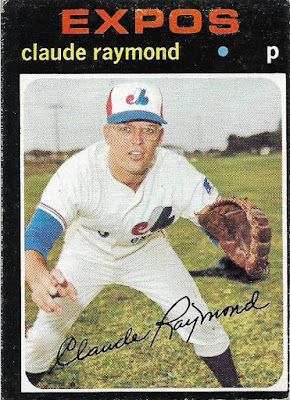 Who is the man: Claude Raymond was coming off his first full season with his hometown team when this card was issued. The Quebec native was purchased by the Expos from the Braves late in the 1969 season.

Can ya dig it: This is Raymond's only card featuring him in an Expos uniform.

Right on: Raymond, like so many of his fellow pitchers in those days, made sure he was posed ready to field that comebacker.

You see that cat Raymond is a bad mother: Raymond set an Expos record with 23 saves in 1970. It was equaled by Mike Marshall the following year and then surpassed by Marshall in 1973.

Shut your mouth: Raymond broadcasted Expos games on French TV and radio from 1972-2001, longer than any other broadcaster except for Jacques Doucet, who lasted virtually the entire existence of the Expos.

No one understands him but his woman: Raymond is known in the hobby for appearing on his 1966 Topps card with his pants unzipped. He's also apparently unzipped on his 1967 card, although it's not as obvious. 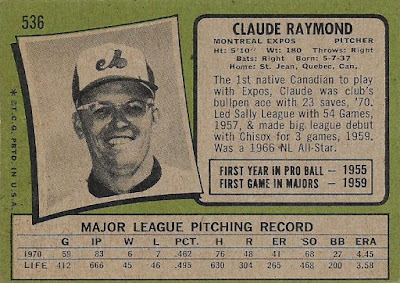 (A word about the back): Yep, Raymond was the first Canadian native to play for the Expos. He was also the first Quebec native to be named an All-Star in 1966.
Posted by night owl at 12:01 AM 3 comments: 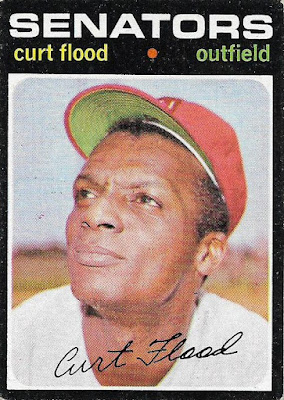 Who is the man: Curt Flood was waiting for his lawsuit against Major League Baseball to go to court when this card was issued. Flood, who refused to report to the Phillies after being traded to the team in October 1969, didn't play a single game in 1970.

Can ya dig it: Flood was traded from the Phillies to the Senators in November 1970. He's actually wearing a Cardinals cap in this photo despite the half-hearted airbrushing attempt to show a "W" on his hat.

Right on: This is Flood's final card from his playing career and a pretty sad one. Cardinals teammate Bob Gibson estimated that Flood received 4 or 5 death threats a day while he sat out the 1970 season.

You see that cat Flood is a bad mother: Flood won seven straight Gold Gloves between 1963-69.

No one understands him but his woman: Players Association leader Marvin Miller told Flood that he didn't have a chance of winning his suit and that he'd never have a job in baseball again, even if he won the case (he didn't). Miller said Flood merely asked whether players would benefit by his lawsuit and Miller told him they would and so would those that followed. "That's good enough for me," Flood said.

"You're a union leader's dream," Miller told him. 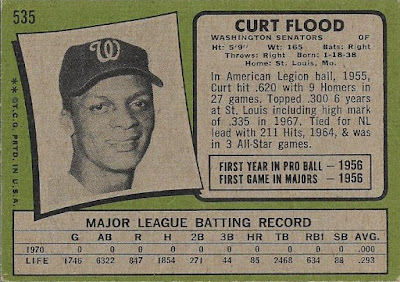 (A word about the back): There you see 13 zeroes where the 1970 season should be, without a word of explanation. It's almost spooky.
Posted by night owl at 12:47 AM 6 comments: 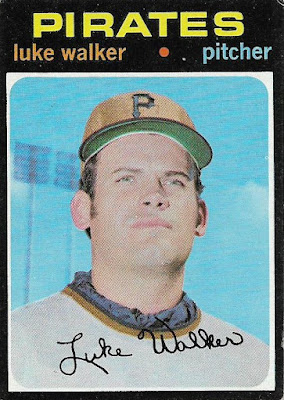 Who is the man: Luke Walker was at the peak of his career when this card was issued. He won 15 games for the NL East-winning Pirates. He finished third in the league in ERA (3.04).

Can ya dig it: Not an attractive card. Walker is wearing his cap so high he appears to have a 3-foot tall head. And that jacket collar tucked into the uniform jersey look is fairly hideous.

Right on: Lots of neutral space for Walker's signature at least.

You see that cat Walker is a bad mother: Walker gave up just six home runs in 163 innings pitched in 1970, which was the best in the National League.

Shut your mouth: Elated over his 1970 season, Walker was quoted in spring training the next year that he could potentially win 25 games in 1971. "Why 20 victories?" he said. "I think I can win 25 games." Walker would win 10 games that year. And 26 for the rest of his career.

No one understands him but his woman: Walker threw the first pitch in a night World Series game. That was in Game 4 of the '71 World Series. But the atmosphere didn't suit him. He opened the game by giving up three straight singles to load the bases, then watched a run score on a passed ball. After an intentional walk, he gave up back-to-back sacrifice flies and was pulled from the game. 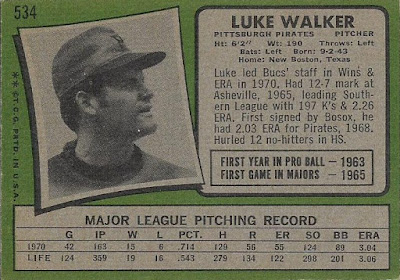 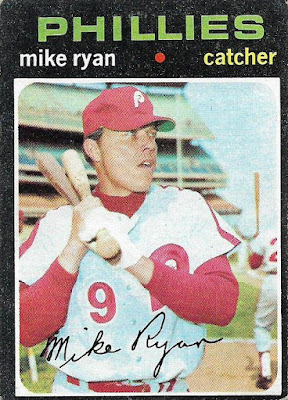 Who is the man: Mike Ryan endured an injury-plagued 1970 season and appeared in just 46 games. It would mark the end of his status as a sometimes starting catcher.

Can ya dig it: I suppose the lifetime .193 hitter does need two bats.

You see that cat Ryan is a bad mother: Ryan's career fielding percentage is .991 (34 errors in 3,382 chances), which is in the top 75 among all major league catchers.

Shut your mouth: Red Sox manager Billy Herman raved over Ryan's defense, saying "there is only a hairline difference between Ryan and (Elston) Howard in defensive ability."

No one understands him but his woman: Ryan was traded for the first time in his career less than two months after getting married, going from the World Series runner-up Red Sox to the Phillies. 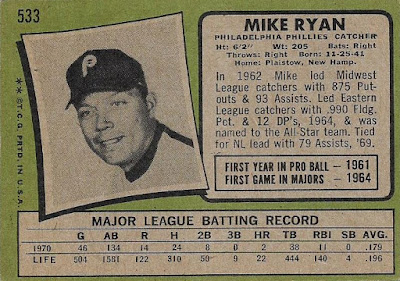 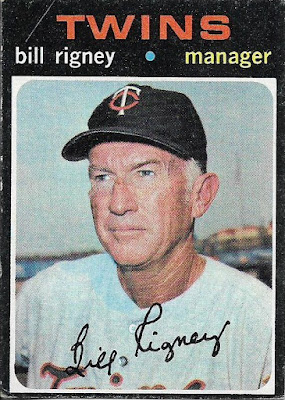 Who is the man: Bill Rigney was entering his second season as manager of the Twins when this card was issued. He led the Twins to the AL West title in 1970.

Can ya dig it: Rigney is featuring the tell-tale leather neck of old-timey managers.

Right on: Rigney's card is 10 cards after the Twins team card. That might be the shortest number of cards between team card and manager in the set. (Yes, I think of stuff like this).

You see that cat Rigney is a bad mother: Rigney took the second-year Angels to a third-place finish in the American League in 1962, behind only the Yankees and Twins. The Angels were in first place on Sept. 12 and Rigney was named AL Manager of the Year after the season.

Shut your mouth: Rigney has one of my favorite quotes about modern ballplayers who think they have all the answers: "They really don't want to know. All they say is, 'hey man, that was 40 years ago. Things are different now.' Oh really? How different? Do they run to third base instead of first? Come on." 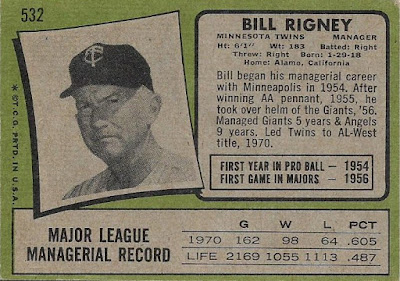 (A word about the back): When Rigney started his managerial career with Minneapolis, he also played several games for the team in 1954 and 1955.
Posted by night owl at 2:22 AM 2 comments: 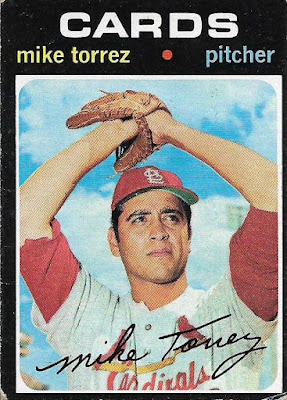 Can ya dig it: Take Torrez out of the photo and that picture looks like a photo I took earlier today.

Right on: Torrez was traded to the Expos in mid-June of 1971, so he probably was not with the Cardinals when kids were pulling his card out of packs.

You see that cat Torrez is a bad mother: Torrez pitched two complete-game victories for the Yankees in the 1977 World Series.

Shut your mouth: Torrez threw a pair of fateful pitches: one that Bucky Dent hit for a 3-run homer against the Red Sox in the 1978 one-game playoff, and one that hit the Astros' Dickie Thon in the head in 1984. Of the pitch that hit Thon, Torrez said: "He would lunge into the plate. He was always on top of the plate. ... He lunged, thinking (the pitch) was going to be away, on the outside corner of the plate. I came in and nailed him."

No one understands him but his woman: Torrez's ex-wife, Danielle, wrote a book in 1983 about the life baseball wives must endure. But she added in an interview about the book that she gained more from that life than she lost. 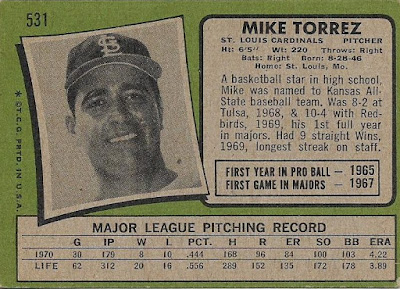 (A word about the back): Torrez is from Topeka, Kansas. St. Louis was his hometown team. But he spent the rest of his career far from Kansas: New York, Baltimore, Boston, Montreal and Oakland.
Posted by night owl at 12:38 AM 2 comments: 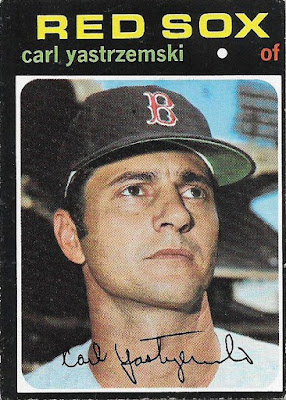 Who is the man: Carl Yastrzemski was coming off his last great powerful season when this card was issued. He hit at least 40 home runs for the third and final time in his career and led the league in runs, on-base percentage, slugging, OPS and total bases.

Can ya dig it: This is possibly the tightest shot on Yastrzemski of all of his Topps flagship cards. He looks pretty regal with the Yankee Stadium stands as a backdrop.

Right on: Still not over Yastrzemski popping up to third base for the final out of the one-game playoff against the Yankees in 1978.

You see that cat Yastrzemski is a bad mother: For a good portion of my life, Yastrzemski was "the last player to hit for the Triple Crown," which he was for 45 years.

Shut your mouth: Yaz grew up on Long Island and was a top high school player. The Yankees made overtures toward him and in Yastrzemski's autobiography, he says that a Yankee scout once came to the house and exchanged bonus signing numbers with Yaz's dad. The scout was so shocked by Yastzremski's dad's figure of $100,000, he said the Yankees would never pay that and flipped his pencil in the air. Yastrzemski's dad told the scout, "Nobody throws a pencil in my house. Get the hell out and never come back."

No one understands him but his woman: For a year, Yastrzemski held the major league record for most games played with 3,308. Pete Rose broke it the following season. 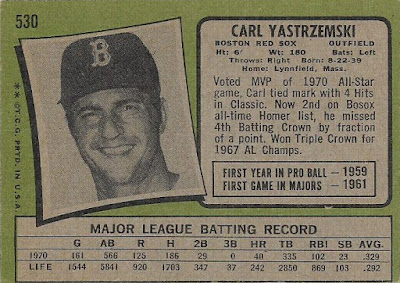 (A word about the back): As discussed earlier, Yastrzemski missed out on the 1970 batting title by .0003 to the Angels' Alex Johnson.
Posted by night owl at 11:59 PM 4 comments: 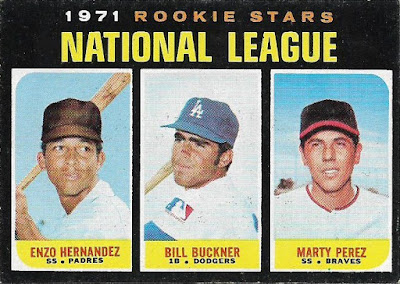 Who is the man: Enzo Hernandez, Bill Buckner and Marty Perez all spent the majority of their 1970 baseball year in the minors, but both Buckner and Perez made brief visits to the majors that year.

Can ya dig it: This marks a departure in the presentation of the rookies in the set. Up to this point, they have been categorized by team, two at a time. But this one is much more lenient, selecting three players from random NL teams. Topps started this practice of some rookie stars cards focusing on teams and some on leagues in the mid-1960s and it would continue into the early '70s.

You see those rookies are bad mothers: Really, no, they're not. Nobody cared about rookie cards in 1971. This isn't even Buckner's rookie card (it's in the 1970 set).

No one understands him but his woman: Buckner's wife is Jody. Perez's wife is Judy. I don't know the name of the wife of Enzo (Hernandez died in 2013), but I hope it at least starts with a "J". 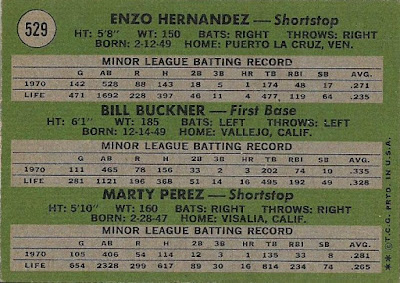 My observation on the back: You can tell by those minor league "life" totals that both Hernandez and Perez had logged plenty of  time in the bushes.
Posted by night owl at 3:07 AM 1 comment: