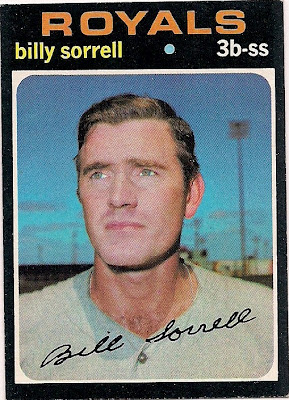 Who is the man: Good question. Billy Sorrell had just completed his most successful major league season. He played in 57 games for the fledgling Kansas City Royals in 1970. It would be his third and final season in the majors.

Can ya dig it: I really do dig the setting sun skyline behind Sorrell.

You see this Sorrell is a bad mother: Sorrell's baseball card claim to fame is that he shares a rookie card with Fergie Jenkins in the 1966 Topps set. But he's not that bad-ass, or else it wouldn't be referred to as "The Fergie Jenkins Rookie Card."

Shut your mouth: I thought this guy was a pitcher for a long time. Yeah, I know it says "3b-ss" right on the front, but the photo says "pitcher" to me.

No one understands him but his woman: We've reached the first player in this set that I had never heard of until obtaining his card. There are a lot of players like this in this set because 1) it's such a large set and 2) it came out four years before I started collecting cards. I'm still not sure why Sorrell received a card in this set. 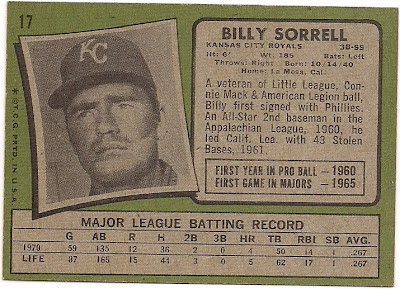 (A word about the back): Uh-oh, the dreaded Little League, Connie Mack and American Legion ball trifecta. You know there isn't much to say when a card is calling you a Little League veteran.
Posted by night owl at 1:25 AM