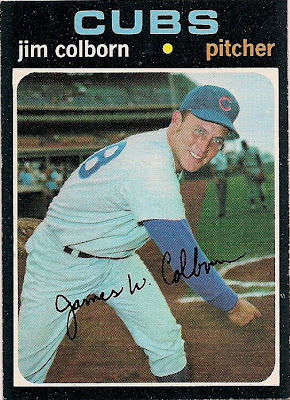 Who is the man: This is the first solo card of Jim Colborn. Look how pleased he is.

Can ya dig it: Colborn is one of three Royals pitchers to throw a no-hitter. The others are Steve Busby and Bret Saberhagen.

Shut your mouth: When Colborn was pitching coach for the Pittsburgh Pirates, he got into several arguments with players on the team. He was eventually let go from his job in 2007.

No one understands him but his woman: Colborn became the Brewers' first 20-game winner, winning 20 in 1973. The feat was totally unexpected as the Cubs traded him at the end of 1971 and Colborn proceeded to go just 7-7 in his first season with the Brewers. After his 20-game season, Baseball Digest did a story on him and called it "Jim Colborn -- the Unknown 20-Game Winner." 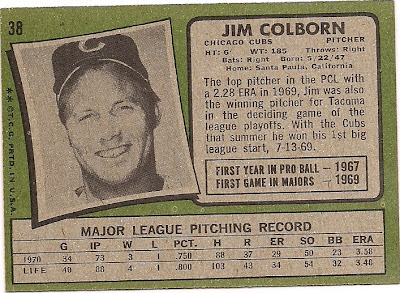 (A word about the back): Yup, he still looks very pleased.
Posted by night owl at 1:04 AM