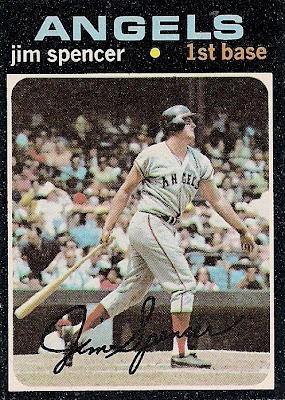 Who is the man: Jim Spencer had just finished his most successful season of what was only a three-year major league career at this point. He played in 146 games for the 1970 Angels and would go on the play 15 years in the majors.

Can ya dig it: The Angels have some fine action cards in this set. Either they, the Yankees, Mets, Astros or Royals have the most action cards in the set. I guess this blog would be the best place to figure that out for sure.

Right on: I can't tell from Spencer's face what he's just done with that swing. The crowd doesn't appear fascinated, so maybe it's just a foul.

You see this cat Spencer is a bad mother: Spencer won a Gold Glove at first base in his first real full season in the majors in 1970. He'd win another Gold Glove in 1977 with the White Sox.

Shut your mouth: Spencer told George Steinbrenner where to go when Spencer was with the Yankees, during spring training in 1981. Receiving pressure from the team owner because of poor numbers at the plate, Spencer said, "I know he thinks he's motivating players that way, but I've played 16 years and I don't need that kind of motivation. I don't need the harrassment."

No one understands him but his woman: Spencer popped out as the previous batter prior to Bucky Dent's memorable three-run home run during the 1978 special playoff against the Red Sox at Fenway Park. So I suppose it could have been Jim @$%&* Spencer instead. 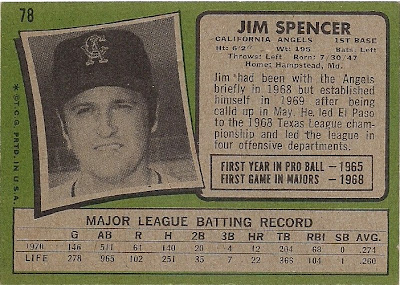 (A word about the back): The four offensive departments in which Spencer led the Texas League in 1968 were: runs, home runs, RBIs and total bases.
Posted by night owl at 12:01 AM