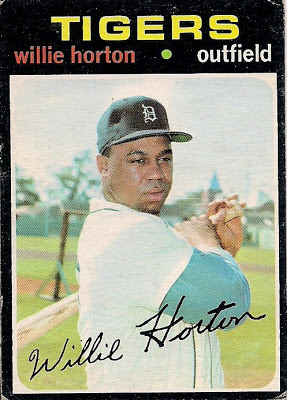 Who is the man: Good question. Who IS that? I only know Willie Horton with the monster fu manchu mustache. This looks totally strange to me.

Willie Horton was coming off an abbreviated 1970 season. An ankle injury at the end of July ended his year.

Can ya dig it: I'm sorry, but that's not a swing that Horton is executing. I don't know how card photographers let players get away with that limp-backswing stuff back in the day.

Right on: Horton is one of 21 children. Right on!

You see this cat Horton is a bad mother: Where do I begin? Horton did road work in the ice and snow during the offseason in order to keep off weight prior to the 1970 season. In 1974, he hit a high foul pop directly over home plate. The ball struck a pigeon, which fell at the feet of Red Sox catcher Bob Montgomery. On the next pitch, Horton singled.

Shut your mouth: During the 1967 race riots in Detroit, Horton entered the fray -- in uniform -- and pleaded for calm. Unfortunately, the riots raged for a week. 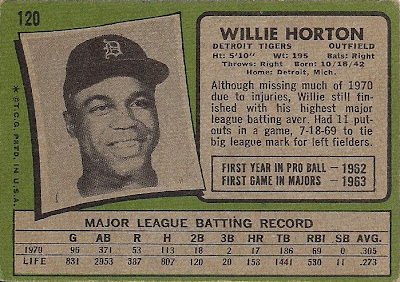 (A word about the back): We have a rare typo in the '71 set. It looks like Topps wanted to write "highest major league batting avg. ever" and somehow merged "avg." and "ever" into "aver."
Posted by night owl at 3:30 AM