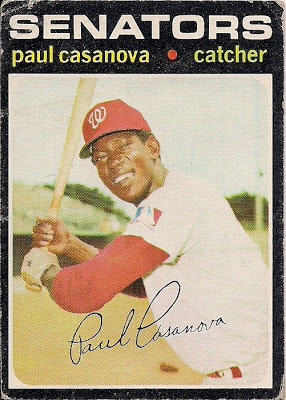 Who is the man: Paul Casanova's playing time decreased yet again in 1970, and it would be the last time he would play in at least 100 games in a season. He spent the 1970s mostly as a backup catcher.

Can ya dig it: Casanova looks very happy in most of his card photos, especially early in his career.

Right on: Now that the Nationals are around, the novelty of seeing old Senators cards has worn off a little bit for me. Don't get me wrong though, I still think they're cool.

You see this cat Casanova is a bad mother: Casanova caught all 22 innings of a game against the White Sox on June 12, 1967. Washington kept him in the game despite his 1-for-9 performance at the plate. Good thing, because Casanova singled in the winning run in his final at-bat.

Shut your mouth: Casanova runs a baseball hitting academy, along with former major leaguer Jackie Hernandez, in his backyard. Here's a video (there's a brief look at baseball cards in it, too).

No one understands him but his woman: Everyone knows that relief pitcher Tom House caught Hank Aaron's record-setting 715th home run. Not many know Casanova caught Aaron's 716th home run. 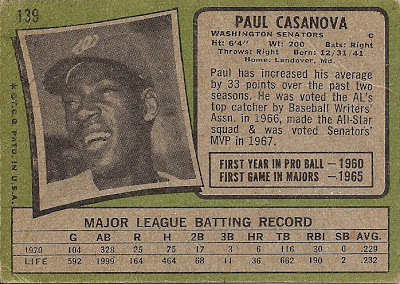 (A word about the back): "Paul has increased his average by 33 points over the past two seasons ..."