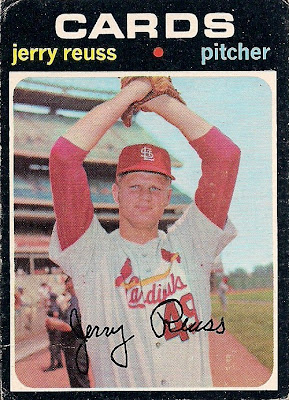 Who is the man: Jerry Reuss had just finished off his first full season in the major leagues when this card arrived. He threw 127-plus innings in 20 games with a pair of shutouts.

Can ya dig it: Security seems to be out in force behind Mr. Reuss.

Right on: This is Reuss' first solo card. He's on a two-person rookie card with Leron Lee in the 1970 Topps set.

You see this cat Reuss is a bad mother: Any former player who comments on my blog is a bad mother of the baddest degree. And, no, I will never stop mentioning that.

Shut your mouth: The Dodgers, the team for which Reuss is probably most closely identified, have released him twice, once as a player and later as a broadcaster.

No one understands him but his woman: Manager Leo Durocher, in his autobiography "Nice Guys Finish Last," called Reuss "the asshole of all-time in my opinion" because of their clashes while with the Astros. The two later reconciled when Reuss pitched for the Dodgers. 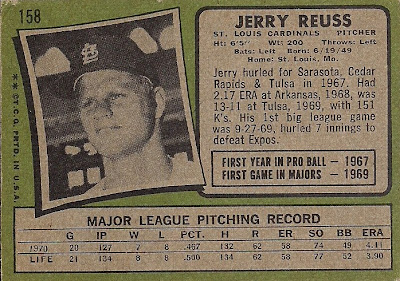 (A word about the back): It amuses me that the write-up appears to be grasping for things to say about someone who would spend 22 seasons in the major leagues.
Posted by night owl at 11:26 PM