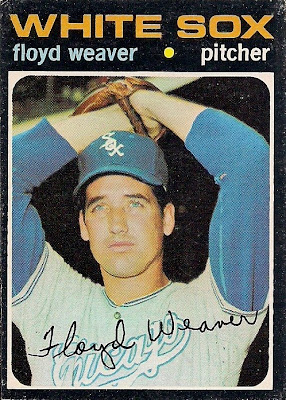 Who is the man: Floyd Weaver had enjoyed his most productive season since 1965 by appearing in 31 games for the White Sox in 1970. In fact, '65 was also the most recent time he had pitched in the major leagues.

Can ya dig it: This has the appearance of a night card, but I think Weaver is simply posing in front of a darkened dugout.

Right on: This is Weaver's final card. He had only three.

You see this cat Weaver is a bad mother: Weaver still holds the record for the most strikeouts in a game for an NJCAA pitcher. He struck out 21 for Paris Junior College on May 10, 1961 in Grand Junction, Colo.

Shut your mouth: Floyd is not a first name you hear much anymore. The most recent major leaguer with the first name of Floyd was pitcher Floyd Bannister, although Butch Henry, who pitched as recently as 1999, had the given name of Floyd. Meanwhile, Weaver's given name was actually David.

No one understands him but his woman: Weaver married his wife, Betty, in 1968, a year in which he was out of baseball. No word on whether he took the year off to marry Betty. 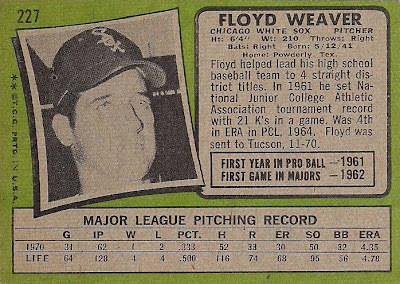