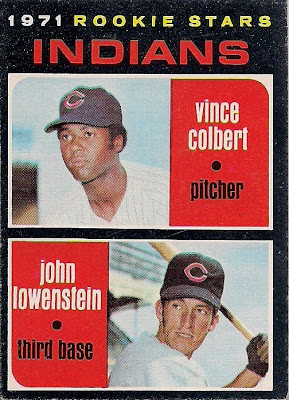 Who is the man: Both Vince Colbert and John Lowenstein received their first "cup o' coffee" (they don't use that term enough anymore) in the majors in 1970. Lowenstein played in 17 games for the Indians. Colbert pitched in 23 games. I guess that's more than a cup of coffee, huh?

Can ya dig it: That's Lowenstein? I don't recognize him without the mustache, glasses and brillo-pad hair.

Right on: Another Yankee Stadium shot in the Lowenstein photo.

You these rookies are bad mothers: What they're bad at is convincing anyone they're bad-ass. Get lost, rookie.

Shut your mouth: It seems like a lot of these 1971 rookies became future broadcasters. Lowenstein was another one, working as an analyst for the Orioles for 10 years.

No one understands him but his woman: Colbert would receive just one solo card, in the 1972 set, and that was it. His last MLB season was 1972. 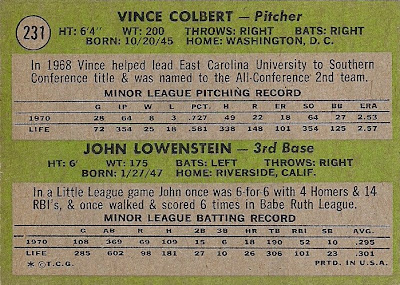 (A word about the back): Lowenstein was known for being a joker. I wouldn't be surprised at all if those Little League and Babe Ruth stats are made up.
Posted by night owl at 2:16 AM