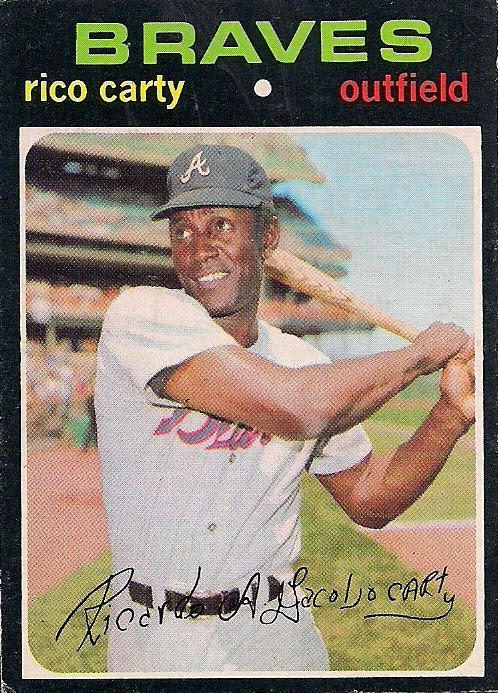 Who is the man: Rico Carty enjoyed the best season of his 15-year major league career in 1970, leading the National League with a .366 batting average, the highest average since Ted Williams hit .388 in 1957. But by the time this card arrived in packs, Carty was shelved for the 1971 season, suffering a broken knee in winter ball in the Dominican Republic.

Can ya dig it: It looks like Carty shortened his full name, Ricardo Adolfo Jacobo Carty, in his signature by abbreviating "Adolfo".

Right on: I believe Carty is taking his hacks before a game against the Mets in Shea Stadium.

You see this cat Carty is a bad mother: Carty once punched teammate Hank Aaron in the face during a fight on a team flight.

Shut your mouth: The fight came about because Carty was talking loudly in Spanish with some of his teammates. Aaron thought they were talking about him and he told them to speak English if they were going to talk about him.

No one understands him but his woman: . The outspoken Carty was also involved in disputes with teammate Ron Santo and managers Frank Robinson and Whitey Herzog. 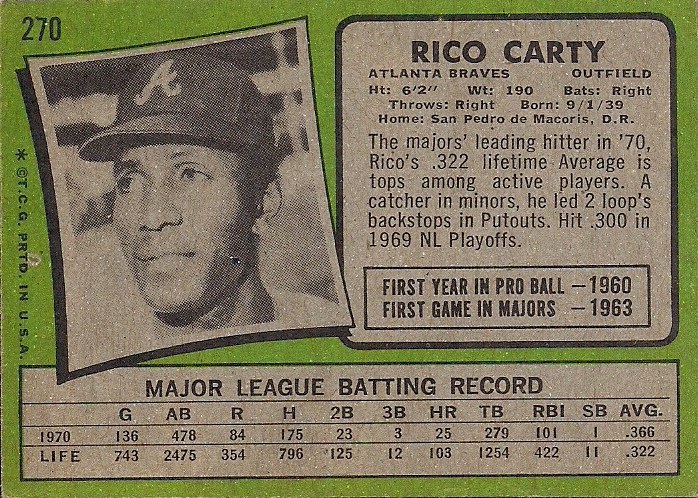 (A word about the back): Carty may have started his pro career as a catcher, but he played just 17 games at catcher in the majors, all during the 1966 season.
Posted by night owl at 12:09 AM