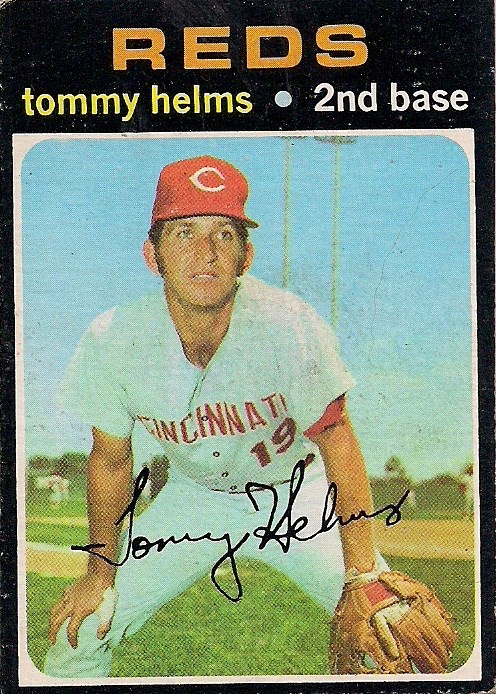 Who is the man: Tommy Helms was entering his final season with the Reds in 1971 before heading off to the Astros in the deal that brought Joe Morgan to Cincinnati.

Right on: Helms featured a few distinctive hairstyles on his cards. This, obviously, is the sideburn phase.

You see this cat Helms is a bad mother: Helms forced Pete Rose to move from second base to left field. Helms was trained as a shortstop, but started his MLB career as a third baseman. In 1967, the Reds put Tony Perez at third and moved Helms to second. Helms also replaced Rose as a manager -- twice -- when Rose was suspended for bumping an umpire in 1988 and when he was suspended from baseball for accusations of gambling on the sport.

Shut your mouth: Helms on the 1970 Reds team that made the World Series: "You've heard of the Big Red Machine? I'm just a hubcap."

No one understands him but his woman: Helms hit one home run in 1970 (and 34 in his 14-year MLB career). His homer bounded off the left field foul pole and when he arrived back at the dugout, two of his teammates were on the floor, pretending to have fainted, while other teammates fanned them with towels. 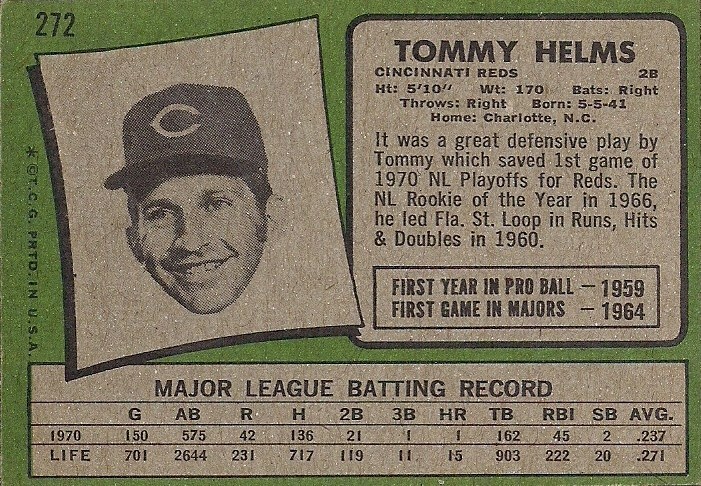 (A word about the back): Sorry, the editor is annoyed with the first sentence. So many extra words. It should say, "Tommy's great defensive play saved first game of 1970 NL playoffs for Reds." Actually, it'd be better to describe the defensive play rather than just call it "great."

The play happened in the third inning. In a scoreless game, with Pirates Matty Alou and Gene Alley on second and third, respectively, Pittsburgh's Dave Cash rocketed a shot to the right of Helms at second base. Helms dove to stop the ball and then threw out Cash at first for the third out. The Reds would prevail in 10 innings with three runs in the 10th.