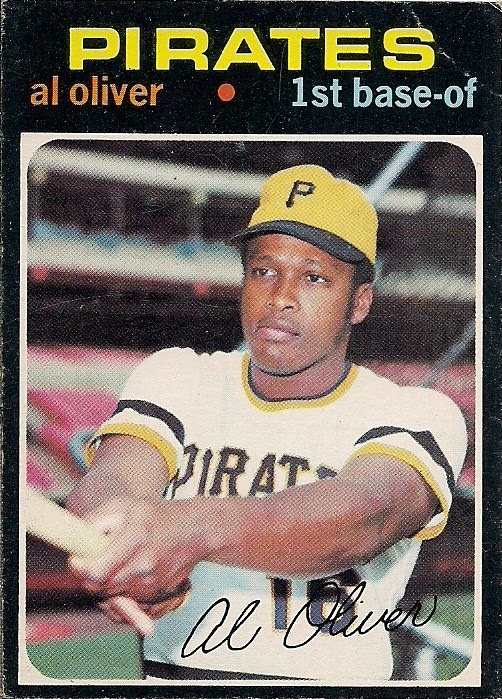 Who is the man: Al Oliver received an abundance of playing time in 1970 after finishing second in the NL Rookie of the Year voting in 1969. He played in 151 games for the Pirates.

Can ya dig it: Oliver is listed as a first baseman first and he basically split time between first and the outfield in 1970. His early cards show both positions until 1976 when he's listed exclusively as an outfielder all the way to 1983, when it reverts to first base again.

Right on: Oliver always looks tough on his cards. Always.

You see that cat Oliver is a bad mother: Oliver was part of five Pirates division champion teams between 1970-75. The only other players to compete on all of those teams were Willie Stargell, Manny Sanguillen, Richie Hebner and Bob Robertson.

Shut your mouth: Oliver is on record as saying that owners' collusion in the mid-1980s prevented him from reaching 3,000 hits. (Oliver retired at age 38 in 1985 with 2,743 hits). In a 1992 story in the Minneapolis Star-Tribune, he recalled watching teammate Roberto Clemente reach 3,000 hits. "We were close friends and it was such a great accomplishment. But I will never forget saying to myself that some day, I would do that. I knew that barring physical injury I would reach that same point. I knew that because of the way I conditioned myself mentally and physically. I said the only thing that could stop me from playing a long time was the system. Unfortunately, it turned out I was right."

No one understands him but his woman: Oliver's first wife, Donna, was black, but because of her light skin tone, Oliver received hate mail from people who thought they had a mixed-race marriage. 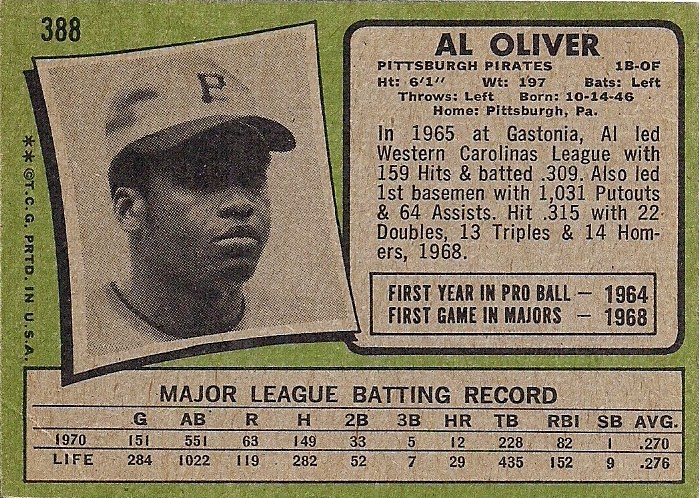