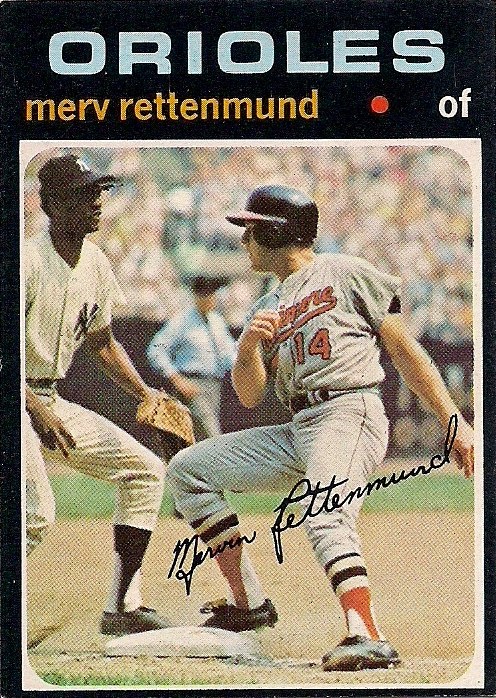 Can ya dig it: The player beside Rettenmund in the photo is Yankees third baseman Jerry Kenney. According to this account, Rettenmund has just reached third base after doubling and then advancing to third on a ground ball by Andy Etchebarren. You'll be happy to know that Rettenmund also scored.

Right on: You may have noticed that this is the second straight Orioles card. That never happened in Topps sets of the '70s, as teams were spaced as evenly apart as possible. The only thing that would upset that pattern was if a player was traded late in Topps' production process, which happened with the previous card, Grant Jackson.

You see that cat Rettenmund is a bad mother: Rettenmund, like Jackson, had a knack for appearing in World Series. Rettenmund appeared in four as a player (69-71 Orioles, 75 Reds) and three as a coach (89-90 A's, 98 Padres).

Shut your mouth: Rettenmund was a key part of the Orioles' World Series-clinching Game 5 victory in 1970, but he didn't find out he was starting in that game until late in Game 4. While sitting in the manager's office, watching the game on TV, manager Earl Weaver came running in, yelling at Rettemund, "Get your feet off the damn desk. Get your ass out of this office ... oh, and by the way, you're starting tomorrow."

No one understands him but his woman: Rettenmund's wife is a travel agent and they've been all over the world. They started taking exotic trips in the offseason after getting married in 1964. 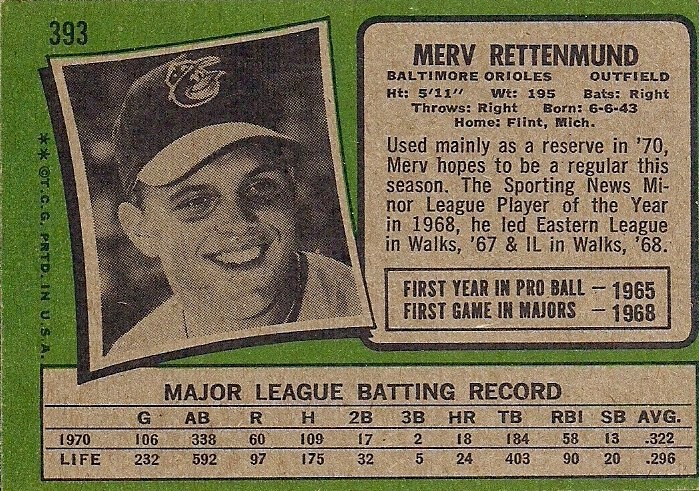 (A word about the back): Marv was basically a regular in 1971. It would be his only season playing more than 110 games in a season.
Posted by night owl at 3:21 AM