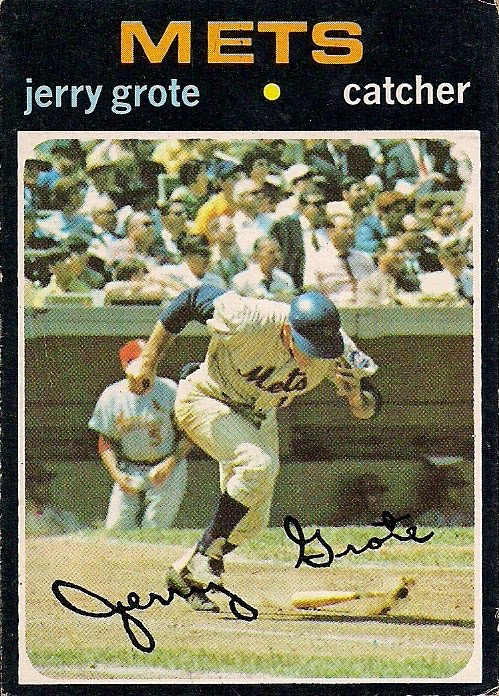 Who is the man: Jerry Grote was entering his sixth season as the Mets' regular catcher as this card hit packs. He batted .255 in 1970, but he was really in there for his defense.

Can ya dig it: This has to be one of the few times that this image has appeared on a baseball card. It's not exactly flattering to the card subject. Grote appears to have popped up and has cast his bat aside in disgust as he dutifully runs it out.

Right on: I believe the Cardinal in the dugout is coach Dick Sisler, who wore No. 5 for St. Louis in 1970.

You see this cat Grote is a bad mother: All you need to know is Johnny Bench thought he'd be playing third base for a living if he and Grote played on the same team.

Shut your mouth: Grote was involved in a flap with home plate umpire Bruce Froemming in 1974. The Mets thought umpires were pocketing baseballs when they rubbed them up before the game and it was reported in the local paper. Froemming then delivered five dozen baseballs to the Mets with a note that said "count them." During that game, a pitch from the Mets' Harry Parker got by Grote and hit Froemming. Froemming accused Grote of letting it past him on purpose. Grote said he was crossed up and also "all I consider is where the accusations come from. That article about the missing baseballs must have really hit home."

No one understands him but his woman: Grote retired in 1979 to spend more time with his family. But his wife filed for divorce and Grote returned to the majors in 1981. 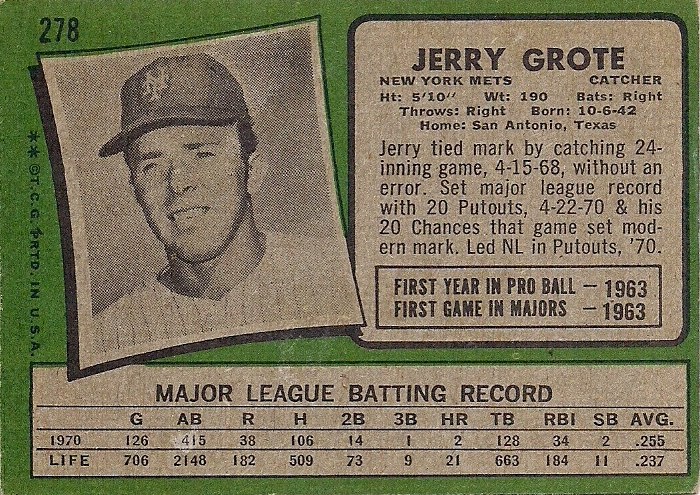 (A word about the back): I would assume that one of the people who shares the catching mark with Grote is Hal King, who also caught 24 innings without an error for the Astros in that game. Houston won 1-0.