Who is the man: Danny Walton enjoyed the most productive season of his sporadic major league career in 1970, hitting 17 home runs in 117 games as a rookie. But he also struck out 126 times. He'd be dealt to the Yankees in June of 1971.

Can ya dig it: That scuffed-up helmet without a logo makes another appearance on a Danny Walton card. He's featured wearing the helmet in a head shot on his 1973 Topps card, probably a photo from the same session (my guess is that he's actually wearing a Seattle Pilots helmet).

Right on: I believe the Pilots ... er, Brewers are holding infield drills behind Walton. I can only hope Mr. Coach is holding a fungo bat.

You see this cat Walton is a bad mother: Walton was the 1969 Sporting News Minor League Player of the Year. Playing for Oklahoma City, he hit .332 with 25 home runs and 119 runs batted in.

Shut your mouth: Walton has just four Topps cards, even though his major league career started in 1968 and ended in 1980 (he was sent down to the minors at least seven separate times). The interesting thing to me is that on those cards, he is not wearing a legitimate cap with a logo in any of them. In 1970, he is not wearing a cap. In 1971 and 1973, he has the logo-less helmet I already mentioned. In 1978, he is wearing a clearly airbrushed Astros helmet (it's my theory that Walton is actually wearing an Albuquerque Dukes uniform and helmet, as he played for the Dodgers Triple A team in 1976 and 1977).

No one understands him but his woman: Walton tore up his knee during the 1970 season and never fully recovered, ruining a promising career in which he had his own fan club in the Brewers' left field bleachers. 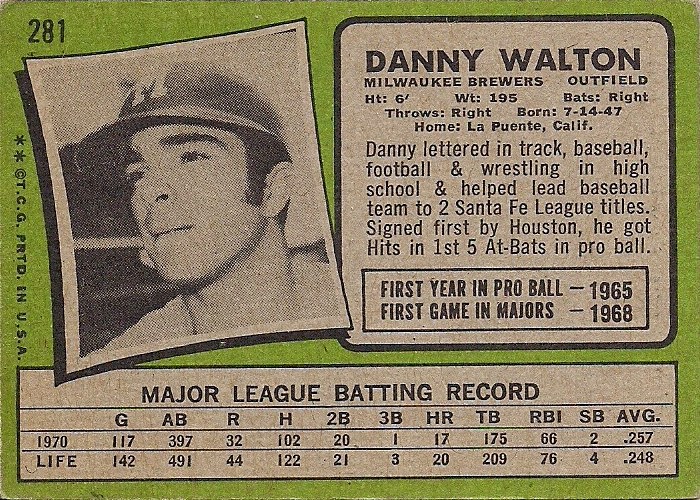 (A word about the back): That is pretty close to the photo that's on Walton's 1973 card. The only differences are that Walton has his mouth open in this photo and that someone airbrushed an "M" onto his helmet.
Posted by night owl at 11:45 PM