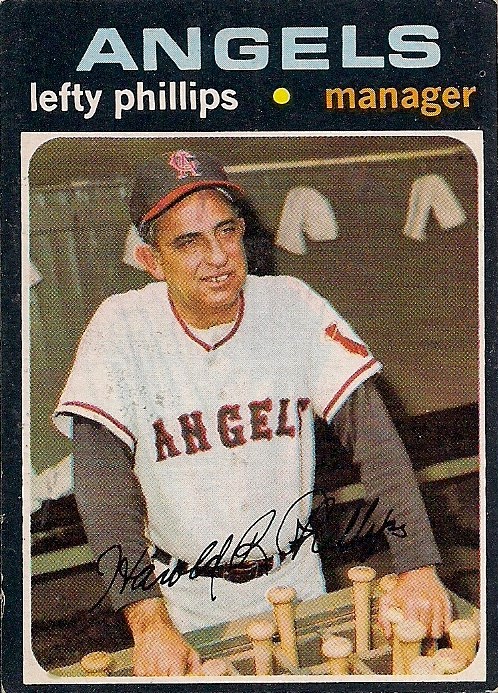 Who is the man: Lefty Phillips was entering the 1971 season after guiding the Angels to their second straight third-place finish in the American League West.

Can ya dig it: Just a wonderful dugout shot. Towels resting neatly on hooks. Lefty poised over the bat rack.

Right on: As you can see by his signature, "Lefty" is a nickname.

You see this cat Phillips is a bad mother: Phillips came to the Angels from the Dodgers, where he was the pitching coach for the bad-ass 1965 rotation that included Koufax, Drysdale, Podres, Perranoski, among others.

Shut your mouth: Late in the '65 season, Johnny Podres was throwing shutout ball against the Astros. But after four innings, Phillips wanted to replace Podres with Howie Reed. Podres told Phillips, "Lefty, I know you don't like me, but I"m pitching another inning." Podres won the game for his final victory for the Dodgers.

No one understands him but his woman: Phillips didn't last with the Angels past the 1971 season. That was the year batting champion Alex Johnson and the Angels famously waged war against each other. Phillips suspended Johnson five times that season and the Angels finished fourth. 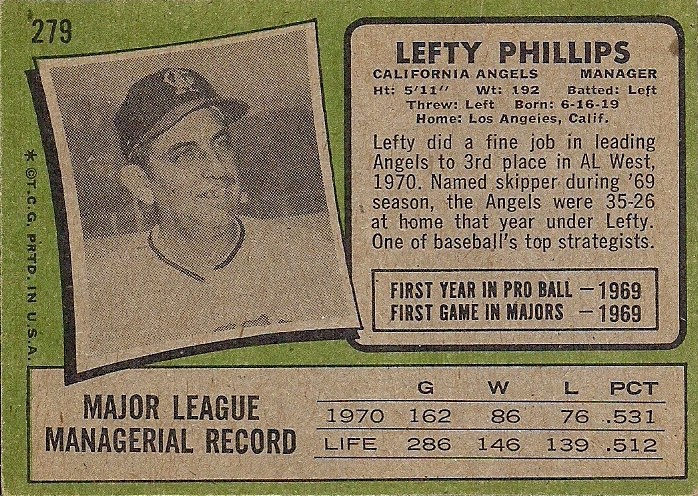 (A word about the back): That "first year in pro ball" refers to his managing career as he was a long time pro scout and coach before he became the second manager in Angels franchise history.
Posted by night owl at 12:06 AM