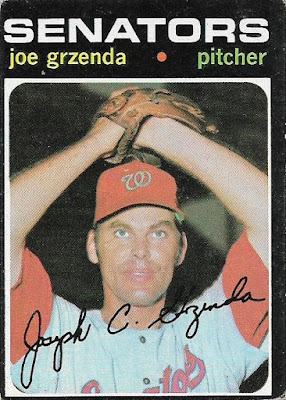 Who is the man: Although Joe Grzenda appeared in more games in his first year with the Senators in 1970 than he had any other year in his career, it was a struggle. He posted a 4.98 ERA in 49 games.

Can ya dig it: I'm not sure if this is a night card. He appears to be posing in front of darkened stands, which could easily be during the day. But the light shining on him could indicate it's night.

Right on: This is the third of Grzenda's four Topps cards and by far his best one. In his first two, he's without a cap. In his last, he's staring to the sky so you look up his nostrils.

You see that cat Grzenda is a bad mother: Grzenda bounced back in 1971, recording a 1.92 ERA for Washington and was the Senators' best relief pitcher.

Shut your mouth: Grzenda, who played for six major league teams and 12 minor league teams, once famously told The Sporting News, "I'd like to stay in baseball long enough to buy a bus, then set fire to it."

No one understands him but his woman: Grzenda was the last Washington Senator on the mound at RFK Stadium in 1971, which was after it was announced that the team was moving to Texas. He was pitching in the ninth against the Yankees in the final game of the season when fans swarmed the field before the final out. The players charged off the field to safety and the game was forfeited to the Yankees. Grzenda kept the ball he was holding and when MLB baseball returned to Washington in 2005, before that first game, Grzenda handed the ball to President George W. Bush, who threw out the first pitch with it. 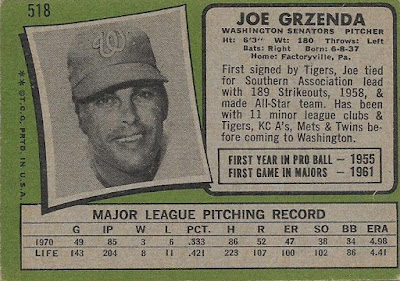