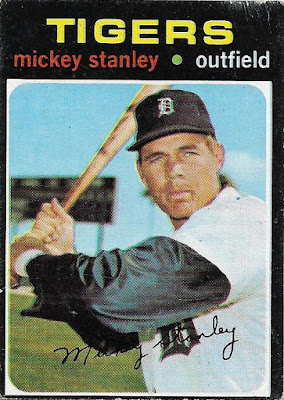 Who is the man: Mickey Stanley was coming off a fine season with the Tigers when this card was issued. He led Detroit in hits, runs, triples, stolen bases (a whopping 10) and won his third straight Gold Glove in center field.

Can ya dig it: You're getting a fine look at that windbreaker Stanley is wearing under his uniform.

Right on: I like the bare-bones scoreboard in the background.

You see that cat Stanley is a bad mother: Stanley helped the Tigers win the World Series in 1968 when he was moved from the outfield to play shortstop, a position he had never played in the majors. After the Tigers clinched the pennant, Stanley was moved to short by manager Mayo Smith, who was seeking another bat in the lineup for the postseason. With Stanley replacing weak-hitting Ray Oyler at short, that allowed Al Kaline, Willie Horton and Jim Northrup to play the outfield. Stanley, who regularly took infield practice before games, made just two errors during the Series and neither had an impact.

Shut your mouth: Stanley played 15 years for the Tigers and was still with the club in 1977 when the Tigers were bringing up future '80s superstars. Catcher Lance Parrish once said to him, "Hi, Mr. Stanley. I was in eighth grade when you were in the World Series."

No one understands him but his woman: Despite the fame Stanley received for playing shortstop in the Series he said he didn't enjoy it because he was "just waiting to screw up." 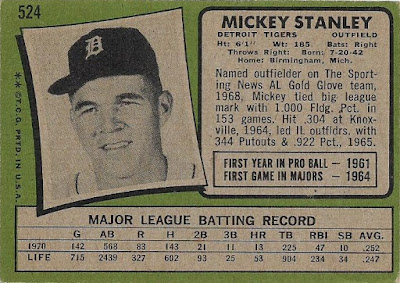 (A word about the back): That photo appears to be fairly old. Stanley looks quite a bit younger here than he does on the front.
Posted by night owl at 2:15 AM