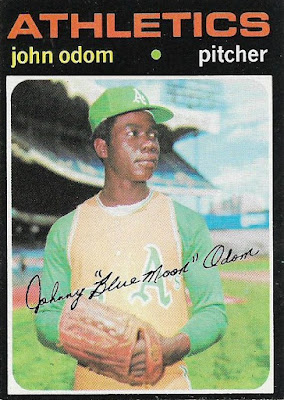 Who is the man: John "Blue Moon" Odom was coming off of elbow surgery when this card was issued. He returned to the A's pitching staff in May 1971 after an abbreviated 1970 season.

Can ya dig it: This is the first time Odom's nickname appears on the front of his baseball card. In the only previous card to feature his autograph, in the 1967 set, the signature simply reads "Johnny Odom."

Right on: Love the kelly green shirt under Odom's uniform. I prefer it to some of the darker forest-green looks the A's exhibited later.

You see that cat Odom is a bad mother: Well, what should I address here: his locker room fight with teammate Rollie Fingers before the '74 World Series? His near fight with teammate Vida Blue? His bumping of home plate umpire Bob Engel after getting called out in the '72 World Series? His shootout in the street in Macon, Ga., with some young burglars that led him to getting shot in the neck and chest between the '71 and '72 seasons?

Shut your mouth: During Odom's 1969 breakout season, he was quoted as putting down the Indians lineup. Indians starter Sam McDowell responded by challenging Odom in the papers. Odom responded by saying, "Sam's dumb. If I had his stuff, I'd win 25 games a year."

No one understands him but his woman: Odom was part of a no-hitter in his final major league victory, in 1976. Pitching against his old team, the A's, he teamed with fellow White Sox hurler Francisco Barrios to no-hit Oakland, despite walking nine batters in five innings of work. 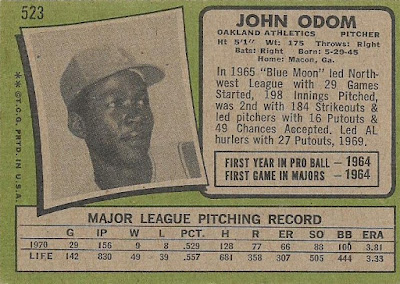 (A word about the back): You never hear about "chances accepted" anymore.
Posted by night owl at 12:21 AM