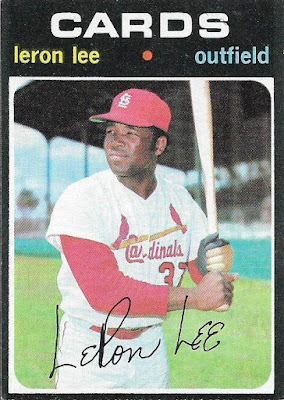 Who is the man: Leron Lee played in 121 games his rookie season as the Cardinals' starting right fielder in 1970. He'd never play in as many games for the rest of his major league career.

Can ya dig it: This is Lee's first solo card.

Right on: Lee's signature on this card (and this card) shows an upper case "r" in his first name. But his name is not featured that way in the printed version, on any of his cards, or in articles or online.

You see that cat Lee is a bad mother: Lee broke up a no-hitter by the Mets' Tom Seaver in the ninth inning during a game in 1972. It was a lot bigger deal before the Mets had a no-hitter to their credit. Not as much of a deal since Johan Santana did his thing.

Shut your mouth: Lee said that early in his career he wound up filling in for Lou Brock when Brock needed a spell. Once Brock came up to him during a white-hot day and said "give me a break today, play left field." Lee agreed, and then Brock said, "Nolan's pitching," referring to Nolan Ryan. Lee said: "That was great. I struck out three times on 11 pitches."

No one understands him but his woman: Lee's claim to fame is his pro career in Japan. He became one of the most successful Americans to play Japanese baseball ever, racking up several records in his 11-year career there. He was the first American player to stay in Japan year-round and married a Japanese woman. 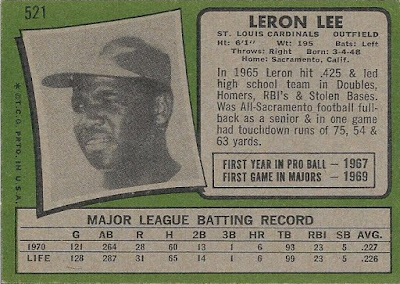 (A word about the back): It drives me nuts when basic baseball terms like "doubles" are capitalized.
Posted by night owl at 1:28 AM