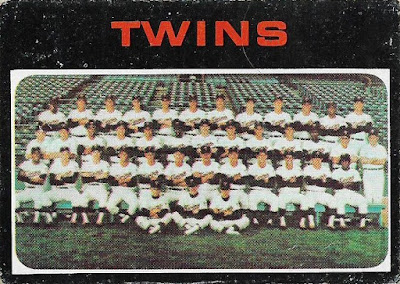 Who is the man: The Minnesota Twins experienced a season of deja vu in 1970. They won the American League West, just as they did in 1969. And they were swept 3-game-to-none by the Orioles in the ALCS, just as they were in 1969.

Can ya dig it: I am still so used to the Metrodome and the Twins playing on artificial grass that I find it odd to see the Twins among actual green grass, whether it's Metropolitan Stadium or Target Field.

Right on: The Twins don't have a lot of non-uniform people posing in the photo like some of the team shots in this set. It looks like there are a couple of clubhouse/trainer sorts at the far right of the second row and that's it.

You see that cat Rigney is a bad mother: Bill Rigney was entering his second season with the Twins after taking over in 1970 for the fired Billy Martin. The team shot is a bit far off and not in focus, but I believe the silver-haired Rigney is the sixth person from the left in the front row.

Shut your mouth: Rigney has his own card just 10 cards away. So I can't write about him anymore here. Don't want to use up material!

No one understands him but his woman: It's much too blurry to ID players. But someone who knows the Twins of this period better than I would have a chance at citing some of them. I think the guy on the far left in the front row is Cesar Tovar but it could just as easily be someone else. 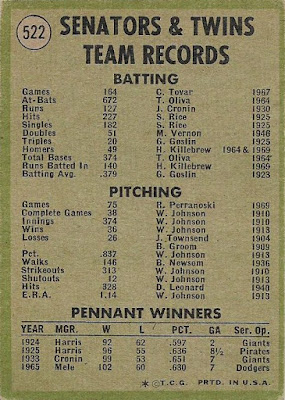 (A word about the back): Those 328 hits that Dutch Leonard allowed in 1940 seems like a massive total in light of today's hits allowed, but it doesn't even make the top 500 in hits allowed per season. In fact, during the early '70s, a few pitchers -- Mickey Lolich, Fergie Jenkins, Gaylord Perry and Wilbur Wood -- were putting up 300-hit totals.
Posted by night owl at 12:33 AM