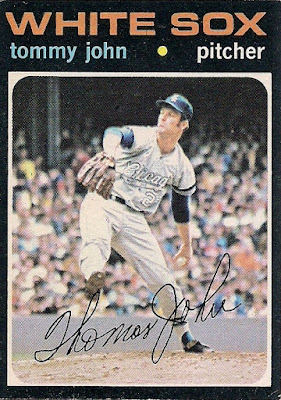 Who is the man: Tommy John was the ace of a 100-loss team in 1970. He was entering his final season with the White Sox.

Right on: Foreshadowing shot here in Yankee Stadium for the future Yankee.

You see that cat John is a bad mother: John made modern medical history by recovering from a surgery that had never been performed before on the elbow of a major league pitcher and winning 20 games less than two years after the surgery.

Shut your mouth: When John injured his arm, it was right after he was passed over by Mets manager Yogi Berra for a spot on the NL All-Star Game pitching roster despite leading the league in victories, which annoyed John. Some speculated that John hurt his arm overextending himself in a bid to prove Berra wrong. John called that idea "a really ignorant statement."

No one understands him but his woman: The day after John's surgery, his wife Sally gave birth to their daughter, Tamara. Since John couldn't move his arm, he had to be fed, dressed and bathed just like his infant daughter. 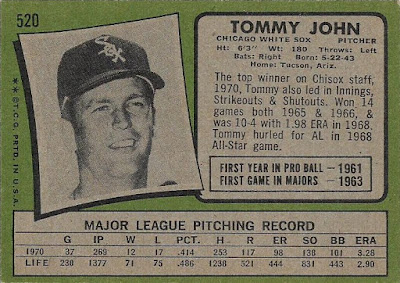 (A word about the back): It's not listed on his stats here, but John led the league in 1970 in wild pitches with 17, the most he threw in any season of his career.
Posted by night owl at 1:12 AM