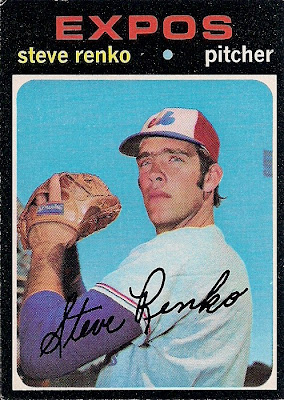 Who is the man: Steve Renko, entering his third year in the majors when this card arrived, had just come off a season in which he was one of two starting pitchers for the Expos with a winning record (the other was Carl Morton, who won an amazing 18 games for the last-place Expos).

Can ya dig it: Renko appears quite tall in this photo and he's listed at 6-foot-5. Asked about his success during his career on a recent radio show in Kansas City, Renko said, "well, I was big, strong and threw at people."

Right on: Some interesting eyebrows you've got going, Steve.

You see this cat Steve is a bad mother: Renko began his pro career as a first baseman and was a decent hitting pitcher, batting above .250 for a season several times. He was a career .215 hitter with six home runs. Until 2005, he was known for a while as the last pitcher to hit seventh in the batting order.

Shut your mouth: Renko played three innings at first base during a game between the Expos and Pirates in 1972. It was an extra-inning affair and Renko played first in the 10th, 11th and 12th. He fielded his position cleanly, too, with five putouts including an unassisted play on a groundout from Pittsburgh's Jose Pagan.

No one understands him but his woman: Renko pitched five one-hitters in his career and lost a no-hitter in the 9th inning while with the Red Sox in 1979. Rookie Rickey Henderson lined a hit off of first baseman Bob Watson's glove with one out in the ninth inning. 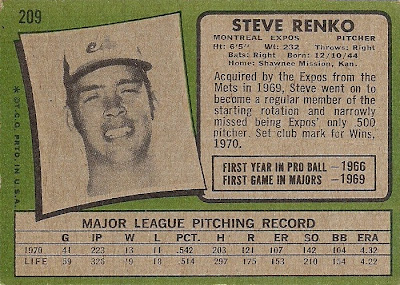 (A word about the back): My goodness, look at that smile. I made a comment on another blog that Renko never smiled on his cards. Perhaps this is why.