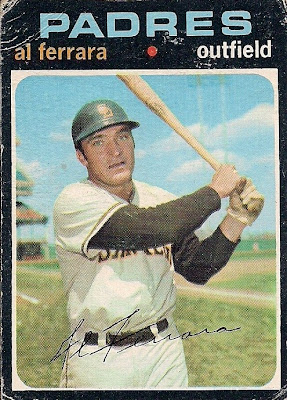 Who is the man: Al Ferrara was entering his last season in the major leagues when this card hit packs. In his last full season, in 1970, he batted .277 in 372 at-bats for the Padres.

Can ya dig it: This is Ferrara's final card from his career.

Right on: Yet another of the first 1971s I ever received. I traded for it on the front porch of my friend as a young teenager.

You see this cat Ferrara is a bad mother: As a member of the Dodgers in the 1960s, Ferrara had show business connections and made TV appearances as an actor in Gilligan's Island and Batman. He also was a classically trained pianist who played Carnegie Hall when he was 16.

Shut your mouth: At the end of his career, Ferrara was traded to the Reds in exchange for backup outfielder Angel Bravo. In his first game with Cincinnati, he misplayed a ball in the outfield and manager Sparky Anderson was waiting for him on the top step when Ferrara returned to the dugout. Ferrara told him, "What do you expect for Angel Bravo, Willie Mays?"

No one understands him but his woman: Ferrara is an answer to a trivia question regarding Tom Seaver's 19-strikeout game in 1970. Ferrara was Seaver's final strikeout victim, allowing him to tie the record for most strikeouts in a game. Ferrara was also Seaver's 10th straight strikeout in the game. (To this day I remember guessing both the team Seaver performed this feat against and the final batter he struck out when a Mets broadcast asked the trivia question way back in the early '80s. I was quite proud of myself). 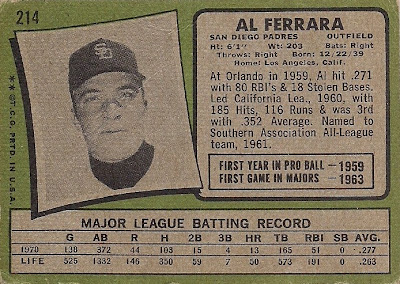 (A word about the back): All I see are mentions of Ferrara's ancient exploits from minor league days. Give me something from the 1970 season, please!
Posted by night owl at 12:44 AM