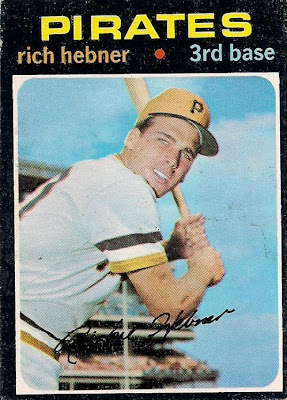 Who is the man: Rich Hebner was two full seasons into his 18-year major league career when this card arrived. He had just made his first appearance in the postseason, going 4-for-6 in two games for the Pirates in the 1970 NLCS.

Can ya dig it: That's a pretty cool angle for the photo. Hebner almost looks 3-D against the backdrop of the stadium.

Right on: I know Hebner with a mustache. This just looks weird.

You see this cat Hebner is a bad mother: Hebner's biggest claim to fame was that he was a gravedigger at a cemetery that his family ran. He dug graves in the offseason and continued to do it after his baseball career ended. That is pretty bad-ass.

Shut your mouth: Ask a Mets fan who was around in 1979 about Hebner and you'll likely hear a mouthful. Hebner was acquired by the Mets in 1979 and didn't like it. Having played for nothing but winners with the Pirates and Phillies, he made it known he wasn't happy and the fans let him have it. Think they still hold a grudge?

No one understands him but his woman: Hebner had a few quirks when he came to bat. He would always pull on the back of his collar. Also, when he missed a pitch, he would flip his bat and try to catch it. 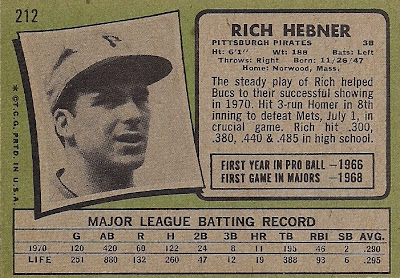 (A word about the back): This has got to be one of the few players that has his batting average as a high school freshman on a Topps baseball card.