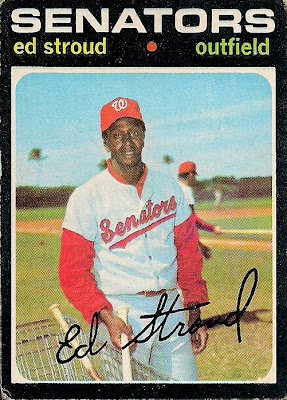 Who is the man: Ed Stroud had just finished his most productive season in the major leagues. Mostly a part-time player up until 1970, he received 433 at-bats in 129 games with the Senators, batting .266.

Can ya dig it: This is the final card of Stroud issued during his career.

Right on: Is there anything happier than choosing your bat out of a shopping cart? Stroud doesn't think so.

You see this cat Stroud is a bad mother: Stroud's best asset was stealing a base, and he was nicknamed "The Creeper" for his deceptive move off first base.

Shut your mouth: After Stroud had his jaw broken by a pitch, the Orioles' Paul Blair told him, "I hope you didn't pay that plastic surgeon for that face of yours. You either got to get your money back, or you got to get another operation."

No one understands him but his woman: Stroud's other nickname was "The Streak" for his ability to run. Taken out of context, "The Streak" and "The Creeper" don't seem like they could represent the same person. (A word about the back): Stroud was a Halloween baby.

Also, I looked up his "top day in the majors." It came against the Yankees. In the first game, Stroud went 2-for-4 with a triple and a home run off of Stan Bahnsen (the Yankees won 13-4). In the second game, he went 3-for-5 with a double and home run off Fred Talbot and a single off Jim Bouton (the Senators won 6-2).
Posted by night owl at 3:10 AM