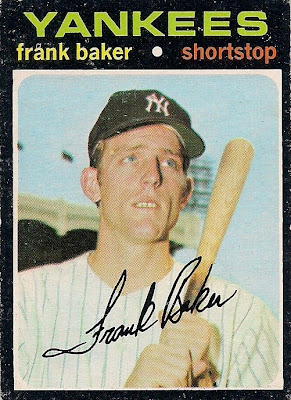 Who is the man: Frank Baker was entering the 1971 season with his first major league experience under his belt. He played in 35 games for the Yankees in 1970, batting .231 in 117 at-bats.

Can ya dig it: This is an upgraded version of a very beat-up Baker card I obtained in a trade with a young Yankees fan when I was a teenager. The only reason he was willing to deal such an old Yankees card was because it was such a disaster.

Right on: Baker looks so wistful on this card. It's almost as if he already misses his career.

You see this cat Baker is a bad mother: Baker hit exactly one home run in 146 career games, but he made it count. He hit a grand slam in the eighth inning against the Indians' Dick Bosman on Sept. 28, 1973, an 18-4 victory for the Orioles. OK, so the score was 14-4 before Baker hit his slam. I'll bet it was still a titan blast.

Shut your mouth: Baker was known as a quality fielder, but he committed two errors that led to two runs for the Senators in the last game in Washington Senators history. The Senators held a 7-5 lead over the Yankees in the ninth inning of that game, but the game was forfeited to the Yankees when fans stormed the field.

No one understands him but his mother: Baker isn't the only Frank Baker to play major league ball. The legendary Frank "Home Run" Baker was a hero of the 1911 World Series. If that's not confusing enough, there was an African-American outfielder for the Indians who played at the same time as the Yankees' Baker who was also named Frank Baker. 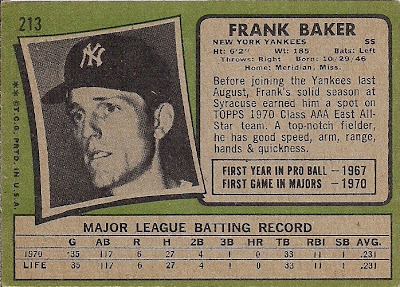 (A word about the back): You'll notice there's no reference to batting in his write-up. That's because .231 would be the best average he'd have in the majors. In three more seasons, he wouldn't break .200.