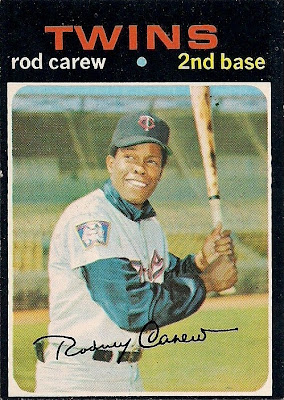 Who is the man: Rod Carew had just completed an injury-plagued season when this card was issued. A rolling block from the Brewers' Mike Hegan tore ligaments in his knee during a June 22, 1970 game, basically ending his season.

Can ya dig it: This is the first time on a Topps card that anyone saw Carew smile. And it would be essentiallly the last time until his 1981 Donruss card.

You see this cat Carew is a bad mother: The first time I ever experienced a player flirting with hitting .400 in a season was with Carew in 1977. I can't remember how late in the season he was hitting .400, but I do remember him still over .400 near the end of June. Of course, he finished at .388 and that is bad ass.

Shut your mouth: Carew and his wife were involved in a distressing incident on an airplane after the death of their 18-year-old daughter in 1996. The Carews objected to how a photo of their daughter was being treated and stored by a male flight attendant. The pilot eventually told the Carews to leave the plane and apologize to the flight attendant, who they thought was rude. "I bit my tongue and apologized," Carew said.

No one understands him but his woman: Carew's marriage to his wife, who is Jewish, prompted death threats. For a long time, Carew was thought to have converted to Judaism. But he said publicly a little over a year ago that he once intended to convert but never did (despite what the Adam Sandler Hanukkah song says). 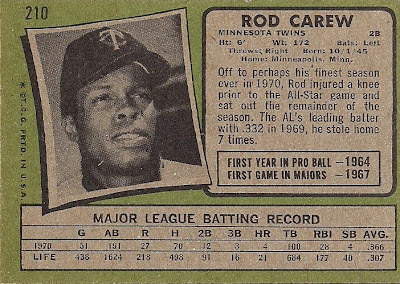 (A word about the back): Carew's stats are always awesome.
Posted by night owl at 1:32 AM