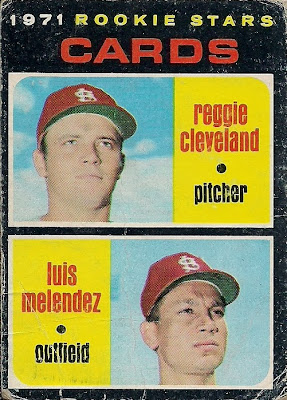 Who is the man: Both Reggie Cleveland and Luis Melendez were key members of the Cardinals' Triple A team in Tulsa in 1970 and received call-ups during the season. Cleveland got knocked around, going 0-4 with a 7.62 ERA. Melendez hit .300 in 70 at-bats.

Can ya dig it: My, my, this card is lousy shape. I guess I'm not finished with this set after all.

Right on: Both Cleveland and Melendez look hypnotized.

You see these rookies are bad mothers: No way. Rookies were just rookies in 1971. Don't make it a bigger deal than it is.

Shut your mouth: Cleveland battled weight issues during his career and early on with the Cardinals it earned him the nicknames "Double Cheeseburger" and "Snacks."

No one understand him but his woman: Melendez's 1975 Topps card features one of the best cartoons ever, especially for Melendez. 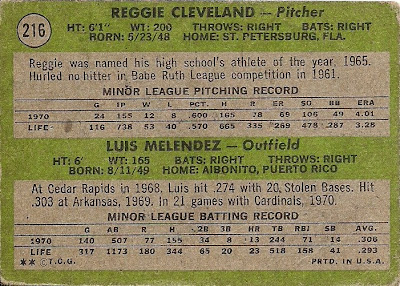 (A word about the back): Cleveland's father was in the Canadian military and he played for the Canadian forces' high school in Alberta, where he lettered in baseball, hockey ... and curling.
Posted by night owl at 2:12 AM