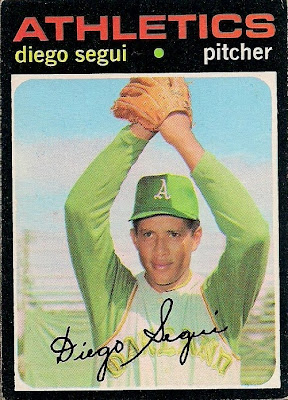 Who is the man: The man is Diego Segui, American League ERA champion of 1970 in his third separate stint with the Athletics.

Can ya dig it: Every time I see one of these off-center portraits, I wonder what the photographer didn't want us to see -- in this case to the left of Segui.

Right on: That's a lot of green in the photo.

You see this cat Segui is a bad mother: Segui had the best season of his 15-year major league career with the Seattle Pilots in 1969. He was the best pitcher on that team made world famous by Jim Bouton's "Ball Four." That's a pretty bad-ass achievement right there.

Shut your mouth: Segui was often accused of throwing a spitball because he often blew on his hands during the extend period of time he took between pitches. Segui denied it saying his forkball might react like a spitball, but was exclusively a forkball.

No one understands him but his woman: Segui played for seven different teams and at one point was frustrated by switching teams all the time. In an interview with the Boston Globe he asked "Why don't they like me, so that I have to go from one team to another so much?" 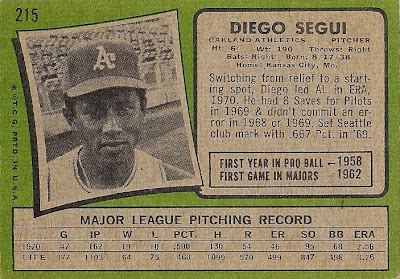