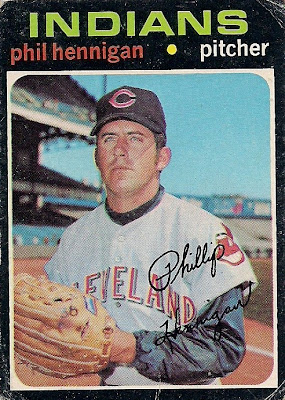 Who is the man: Phil Hennigan was entering his second full season in the major leagues with the release of this card. He pitched in 42 games in 1970 after a nine-game showing with the Indians in 1969.

Can ya dig it: This is another card I obtained in a trade as a teenager. I didn't know anything about Hennigan then, and I'm ashamed to say I didn't increase my knowledge about him any before I started this post. So let's learn together.

Right on: Hennigan is looking very stately there in Yankee Stadium. It's as if Bob Sheppard is announcing his name.

You see this cat Hennigan is a bad mother: The first major league batter Hennigan faced was the player on the card in the previous post, Rod Carew. Hennigan retired Carew on a fly ball.

Shut your mouth: Hennigan is quoted in the "Gigantic Book Of Baseball Quotations" thusly: "When I was in the majors, I worked on a nudist ball. It had nothing on it."

No one understands him but his woman: Hennigan's final card features a photo in which he is airbrushed into a Mets cap and is more of an advertisement for Pepsi. 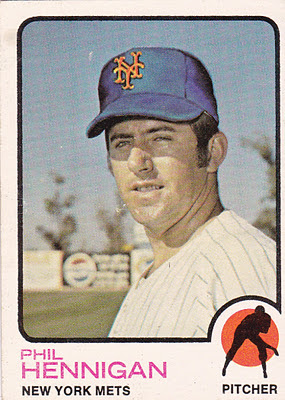 Not the greatest way to go out. 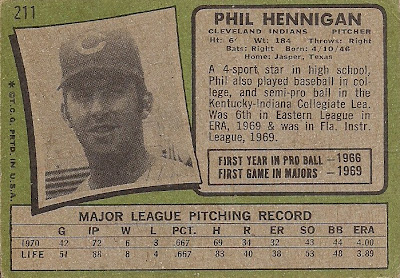