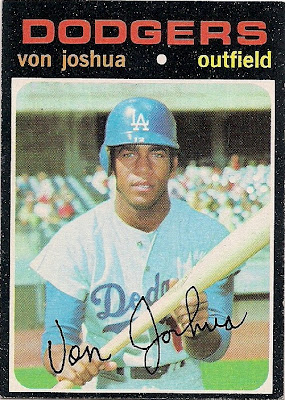 Who is the man: Von Joshua played in 72 games for the Dodgers in 1970, but totaled just 109 at-bats. He was used often as an outfield replacement. It would be the beginning of a pattern with the Dodgers for Joshua. L.A. would use him often as defensive replacement or pinch-hitter.

Can ya dig it: Joshua appears to have an attentive audience for his half-hearted attempt at replicating a bunting pose.

You see this cat Joshua is a bad mother: Joshua is one of the most cited examples of what happens when a role player finally gets a chance to play full-time. After getting no more than 159 at-bats during any of the first five years in his career, the Giants picked Joshua up on waivers and gave him the starting center field job. Joshua proceeded to hit .318 in 507 at-bats, good for seventh in the National League.

Shut your mouth: Joshua was a first-round draft pick of the Giants, but the team couldn't sign him. He signed with the Dodgers the following year. Even though his best season came with the Giants in '75, he's often said his two stints with the Dodgers (1969-74 and 1979) were the best times of his career.

No one understands him but his woman: Joshua has worked as a hitting coach in the majors and the minors for a long time. He worked for the White Sox during the 1990s, getting called up to the big league club in 1998. But he lost his job in 2001 during a team hitting slump. Joshua said he was hurt by the decision. "How can you go from being the best thing since sliced bread and two or three months later, you're stupid?" he said. 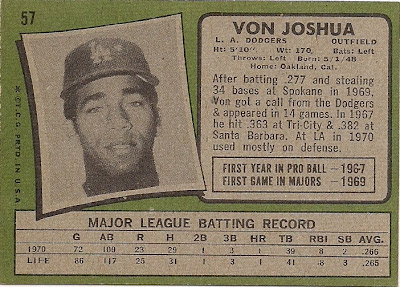 (A word about the back): The color used for the backs of the 1971 cards is very of its era. I'm not crazy about the color. But I do think that the current Archives set should have matched the color of its backs exactly with the cards that supposedly pay tribute to the '71 set. 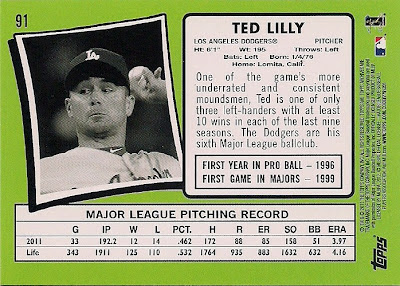