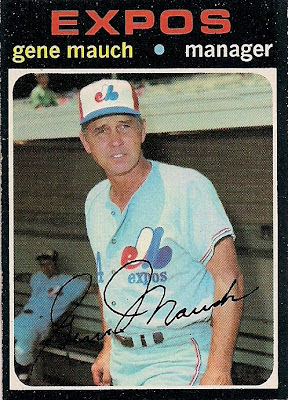 Who is the man: Gene Mauch was about to enter his third season of managing the expansion Montreal Expos when this card arrived. His 1970 season, in which the Expos won 73 games after winning only 52 in 1969, was considered something of a success.

Can ya dig it: Anyone know who is sitting in the background? He's slouching.

Right on: Some manager cards are absolutely terrific. This is one of them. Just a wonderful shot. I do wish I knew if Mauch has a bat in his right hand.

You see this cat Mauch is a bad mother: Mauch's hot temper was well-known. In a famous story, he threw spare ribs all over the clubhouse after a Phillies loss in 1963 because he thought players were taking things too lightly.

Shut your mouth: Gene Mauch didn't want to hear it when people praised him. "If you're in (baseball) for 40 years, you ought to learn something," he said.

No one understands him but his woman: Mauch is most famous for coming close to the World Series as a manager but never reaching it. He never won a pennant despite winning more than 1,900 games. He also managed teams that lost, respectively, 23 and 20 straight games. There's a lot there that no one else ever experienced. Fortunately. 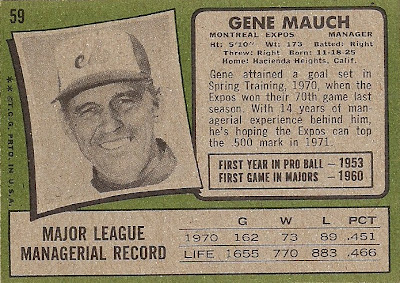