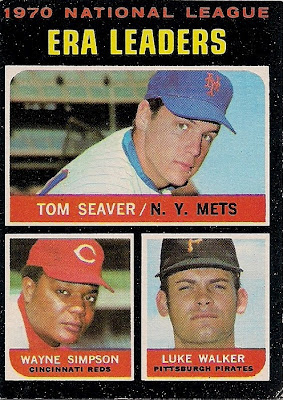 Can ya dig it: All three pitchers are giving the pitcher the stare down. Luke Walker is going for the squint-eyed look. But it's still bad-ass.

You see these cats are bad mothers: I can tell. But I'll go in more detail when their individual cards pop up.

Shut your mouth: Tom Seaver was a broadcaster for the Yankees in the late '80s and early '90s. His partner for most of those games was Phil Rizzuto. Seaver and Rizzuto got along well enough, with Rizzuto calling Seaver by his last name, as he often did with Bill White. But I got the feeling sometimes that Seaver wanted to focus more on the game and less on cannolis.

No one understands him but his woman: Simpson enjoyed a phenomenal start to his 1970 season, winning 13 of his first 14 decisions and being named to the All-Star team. But he tore his rotator cuff in July and it ruined his career. Simpson gutted through the injury, but all he received for it were accusations that his arm problems were more mental than physical. That caused Simpson to lash out at the Reds after they traded him to the Royals after the season. 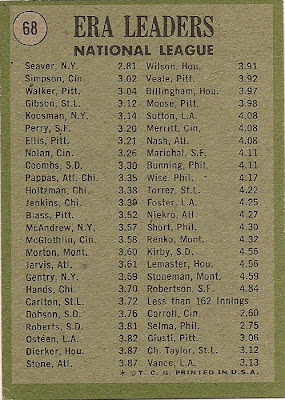