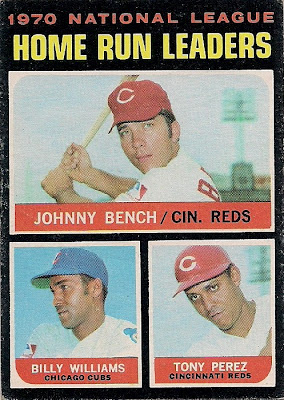 Can ya dig it: Is that the same structure in the background in both Bench's and Perez's photos? If so, what is it?

Right on: You may be thinking I featured this card already. But actually, it's a different one. It's just that all three players were also featured on the National League RBI leaders card two posts ago. Only this time, Williams and Perez are swapped.

You see these cats are bad mothers: Saving it for later.

Shut your mouth: Sparky Anderson often credited Tony Perez for being the key player in the success of the Big Red Machine. When Perez was traded to the Expos after the 1976 season, many pointed to the trade as the reason why the Reds weren't the same after '76. All of this must've made Dan Driessen feel terrific. Driessen took over at first base for Perez and was Cincinnati's first baseman for the next seven-plus years. 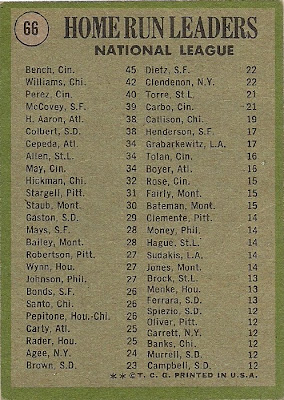 (A word about the back): I know Roberto Clemente wasn't really a home run hitter, but seeing him with just one more home run than Lou Brock and one less home run than John Bateman is a little odd.