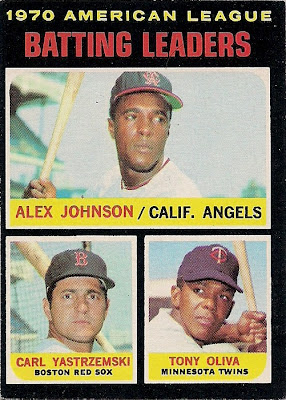 Who is the man: Alex Johnson is the man. He beat out Carl Yastrzemski for the 1970 American League batting title by .0003 of a point, one of the closest batting races in history.

Can ya dig it: I can dig these leaders subsets because you often get three stars on one card, but I can tell they're going to make for difficult posts to write.

Right on: These are among the greatest-looking leaders cards ever produced by Topps.

You see these cats are bad mothers: For fear of losing material when these players' individual cards come up, I am going to skip this category.

Shut your mouth: Alex Johnson robbed Carl Yastrzemski of a home run during the 1970 season, a home run that would have put Yaz over Johnson for the batting title. Johnson later admitted that a fan in the stands put the ball in his glove.

No on understand him but his woman: The year following Johnson's batting title, the Angels benched him, citing attitude issues. He was later indefinitely suspended. Although reinstated, he wouldn't play for the Angels again and never recovered the form he displayed in 1970. 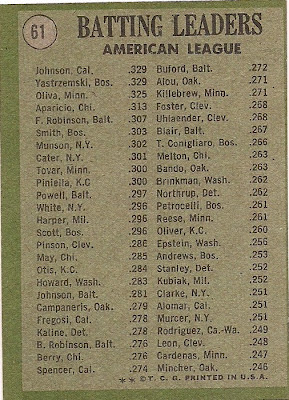 (A word about the back): I love the in-depth listing of the leaders. Don Mincher, at .246, is a batting leader!!! Topps really needs to bring back the long lists on the backs of cards. Collectors love that stuff. ... Well, at least old collectors like me do.
Posted by night owl at 1:54 AM