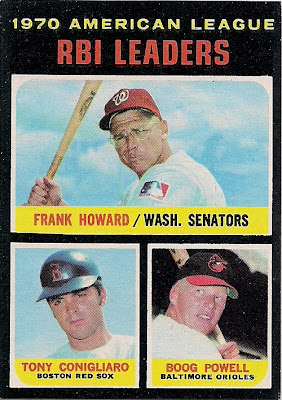 Who is the man: Frank Howard is the man! Howard had just completed the third in an absolute scorching trifecta of slugging seasons. Howard was one of the most feared sluggers from 1968-70, playing for a terrible Senators team.

Can ya dig it: Howard looks like he's a second away from spitting.

Right on: Tony Conigliaro is shown with the Red Sox on this card, but with the Angels on his base card.

You these cats are bad mothers: I have no doubt, but we'll wait until their individual cards appear.

Shut your mouth: Boog Powell was the Most Valuable Player in 1970 but gets third-billing on this card. Doesn't seem right.

No one understands him but his woman: Howard hit the last home run for the Senators at RFK Stadium on Sept. 30, 1971. After acknowledging the cheers from the fans, he said after the game, "This is utopia for me." 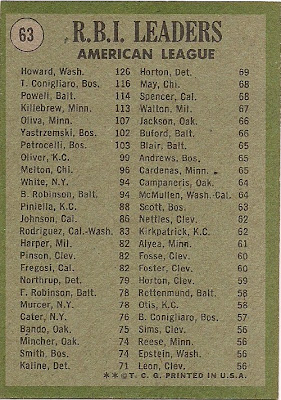 (A word about the back): There are a couple of players on this list that are completely new to me. Brant Alyea of the Twins and Tony Horton of the Indians. I still need to brush up on players from the '60s.
Posted by night owl at 12:39 AM