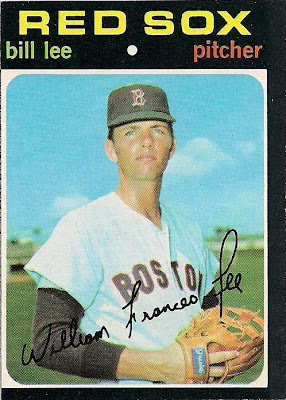 Who is the man: Bill Lee was about to begin the third season of his 14-year major league career in 1971. It would be his first full season in the majors.

Can ya dig it: That doesn't look like the Lee we all know, does it? He would look like that until the mid-70s (his 1973 Topps card is where he starts to exhibit longer hair).

Right on: William Frances Lee sure has a long neck.

You see this cat Lee is a bad mother: I think Lee is great. Not necessarily for his counterculture lifestyle or his verbose criticisms, but because he is passionately in love with baseball. Two years ago, he played a pro game as a 63-year-old and won. He still plays ball, and once said: "The only way to save the world is through baseball. Had there been a franchise in Iraq, most of the problems with Saddam could have been avoided." OK, that's bizarre, but I love it, and it's bad ass.

Shut your mouth: When Lee was drafted by the Red Sox, his father told him, "Now if you can pitch like we both know you can and keep your mouth shut, you'll end up being with them for a long time." Of course, Lee couldn't keep his mouth shut. But he did last with the Red Sox for 10 years.

No one understand him but his woman: Lee says he quotes Latin all the time. He just lost me. 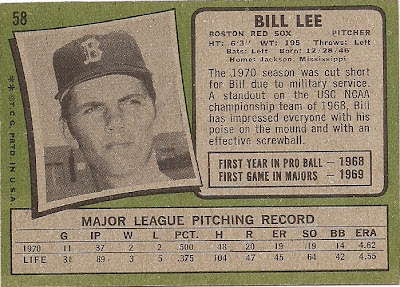 My observation on the back: Lee served in the military as a reservist. Surprisingly, he made it out of the Army without incident.
Posted by night owl at 12:27 AM