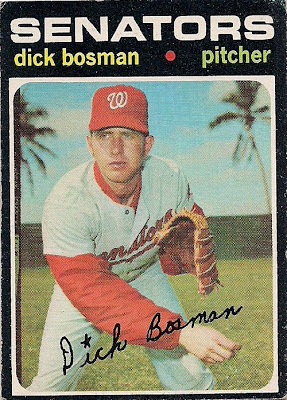 Who is the man: Dick Bosman was the ace of the Washington Senators staff and had just come off the two most prolific seasons of his career thus far. He was a 16-game winner in 1970, on a starting staff in which no one else won more than eight games.

Can ya dig it: I always wonder about guys who dot the I in their name with stars, but it does look pretty cool.

You see this cat Bosman is a bad mother: Bosman rebuilds old cars into hot rods down in Florida. About 10 years ago, his daily ride was a restored, fire-red 1936 Chevy two-door sedan with a 330-horsepower Corvette engine, cruise control, power windows and air-conditioning. Bitchin'

Shut your mouth: Bosman reportedly would tell his teammates, "if you don't hustle when I'm pitching, I'll kick your ass."

No one understands him but his woman: Bosman is known as the only pitcher in which his own error cost him a perfect game. It happened on July 19, 1974 against the A's. A throwing error in the fourth inning prevented the perfect game, but he still got the no-hitter. 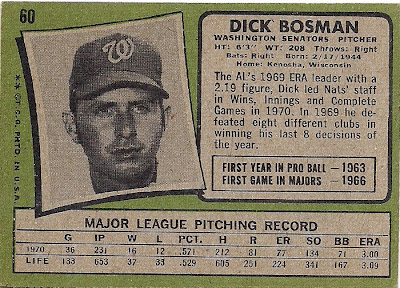 (A word about the back): Getting your final 8 wins against 8 different clubs is so impressive I had to look up how that actually happened: