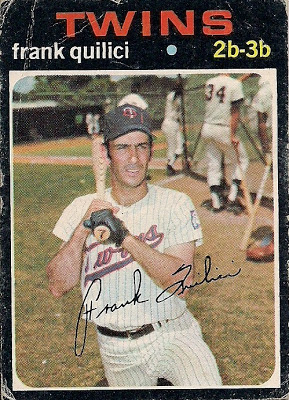 Who is the man: Frank Quilici played 111 games as a backup infielder for the Twins in 1970. This would be his last card as a player.

Can ya dig it: Quilici's playing career was over by the time most collectors pulled this card. He was released by the Twins in April of 1971 and immediately found a job with the Twins as a coach.

Right on: Outside of this card, this is probably the most off-condition card that I have in the set. This is one of the cards I received in a trade as a teenager, part of some hand-me-down 1971s from my friend's older brother.

You see this cat Quilici is a bad mother: Quilici began a six-run third inning with a double off Don Drysdale in the Twins' 8-2 victory over the Dodgers in Game 1 of the World Series in 1965. He came up later in the inning and hit a single.

Shut your mouth: Quilici worked on Twins radio broadcasts during the 1970s and 1980s.

No one understand him but his woman: Quilici won the Twins' managing job at age 33 in 1972. I wonder how the players felt taking orders from a 33-year-old? 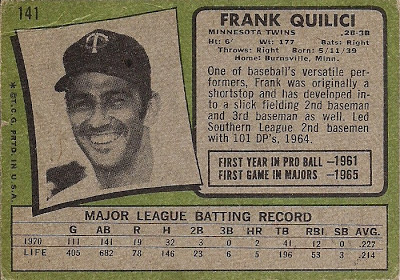 (A word about the back): Quilici played his first season of pro ball in 1961 mainly at shortstop. But for every other year in the minors and in the majors, the vast majority of his games were played at second base.