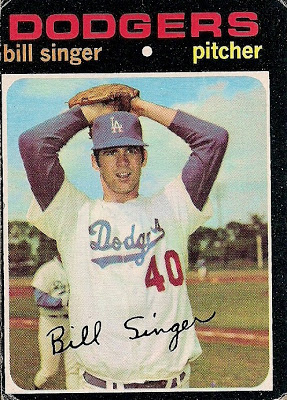 Who is the man: Bill Singer was coming off a very difficult 1970 season after winning 20 games in 1969. He missed half the season due to various ailments and appeared in just 16 games.

Can ya dig it: Singer's 6-foot-4 height was a selling point right out of high school, and you can tell on some of his cards that he was a tall dude. This is one of them.

Right on: Singer does not have a ball in his glove, I don't care what he's telling you.

You see this cat Singer is a bad mother: Singer missed the first two months of the 1970 season after he contracted hepatitis. He spent three weeks in the hospital. In just his third start after his return, he no-hit the Braves for 7 2/3 innings as the Dodgers won 7-0. A month later, he would pitch a no-hitter against the Phillies.

Shut your mouth: After Singer's showing against the Braves, he told the Associated Press, "I just had a devil-may-care attitude. I guess that's why I did so well. The hepatitis boy got 'em."

No one understands him but his woman: In a bizarre exchange with Dodgers assistant to the GM, Kim Ng, Singer -- an employee of the Mets at the time -- mocked Ng's Chinese heritage. Singer blamed his behavior on his diet and being drunk, and he was fired. 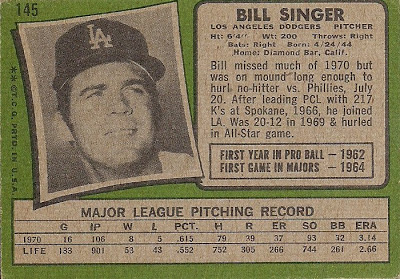 (A word about the back): Singer also missed time in 1970 after breaking a finger while running the bases.
Posted by night owl at 2:04 AM