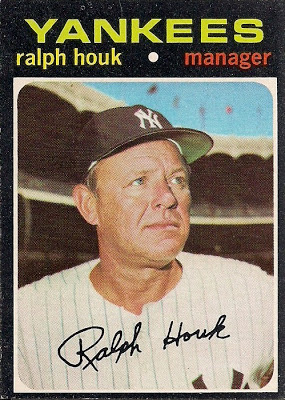 Who is the man: Ralph Houk was entering his sixth year of his second stint as manager of the Yankees as the 1971 card set hit stores.

Can ya dig it: It doesn't get any more managerial than that. Can we have some patriotic music to go with that photo?

Right on: This is one of Houk's better manager cards. He's got a lot of them that I like. The 1962 one is probably the best. Dated, but fantastic.

You see this cat Houk is a bad mother: Houk was known for his temper. Considering how combustible he was, he kept it relatively in check. He was ejected 45 times from games, which is good enough for 14th among major league managers all-time.

Shut your mouth: Houk was known for his gruff handling of players. He took no lip. "None of us questioned Ralph," said former Yankee Tony Kubek in the book "Sixty-One." "He was The Major."

No one understands him but his woman: As I wrote on the 1985 Topps blog, Houk once decked singer Gordon McRae for apparently dancing too close to his wife. Both decker and deckee denied that it happened. 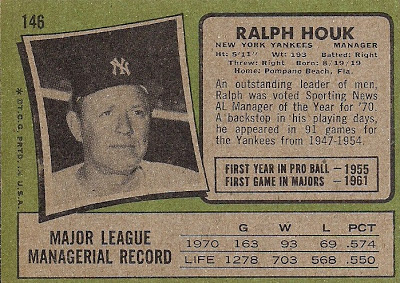 (A word about the back): "An outstanding leader of men ..." If that sounds like military-style praise, it's because it is. Houk was a major in the Army during World War II, and "outstanding leader of men" would be a phrase used to describe him by people like Tommy Lasorda once he became a manager.
Posted by night owl at 12:43 AM