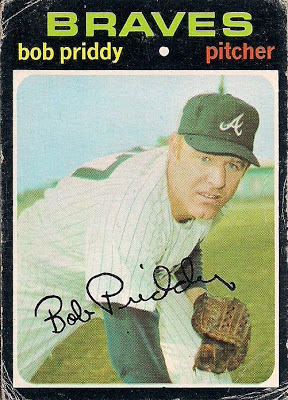 Who is the man: Bob Priddy was entering his final season in the major leagues in 1971. He was coming off a 41-appearance season with the Braves in which he saved a career-high eight games.

Can ya dig it: This is another card from the second series that I received when I was a young teenager. You can see the multi-creased corners. The positive aspect of getting a card so early is I have known who Bob Priddy was since I was 13 years old. How many other people can say that who weren't around when he was pitching? That's the beauty of baseball cards.

You see this cat Priddy is a bad mother: I found a couple of photos of Priddy, including two in which he's just released the ball toward home. He apparently had a flamboyant delivery. Looks like it'd be pretty distracting for the batter.

Shut your mouth:  Priddy appeared on cards dating back to 1964. He comes the closest to cracking a smile on this card. In all the other ones, he looks rather glum.

No one understands him but his woman: Priddy was signed as an infielder and played his first minor league season in the Pirates' chain in the batting lineup. He converted to pitcher the following season. 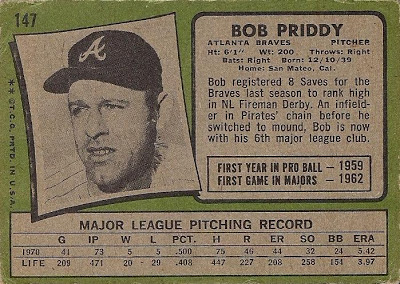 (A word about the back): Players like this illustrate the weakness of the card-back layout in the '71 Topps set. Priddy's conversion from hitter to pitcher is shown in the statistics on other cards. But since Topps showed only one year of stats in '71, you don't get that interesting stat line.
Posted by night owl at 2:45 AM