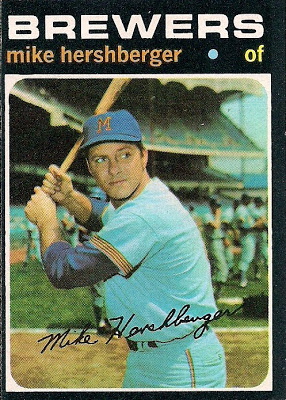 Who is the man: Mike Hershberger spent 49 games with the Milwaukee Brewers in their first season in 1970. He was pictured with the Seattle Pilots on his 1970 Topps card -- after being dealt from the Athletics in January of 1970 -- but of course never played as a Pilot as the franchise moved from Seattle to Milwaukee after the 1969 season.

Can ya dig it: I am falling in love with the Brewers cards in the set. This one, plus this one and this one obviously were taken on the same day -- pregame practice at Yankee Stadium. I love all the players in the background.

Right on: This is Hershberger's final card.

You see this cat Hershberger is a bad mother: Hershberger led the league in sacrifice flies in 1966, but he stayed in the majors for 11 years thanks to his fielding -- particularly his terrific throwing arm. He was among American League assist leaders and led the league in double plays turned by an outfielder several times.

Shut your mouth: Hershberger played for the Kansas City A's from 1965-67. In an interview last year a couple of months before his death, he said that he was surprised that no one on the team has written a book about all the experiences the players had with Charlie O., the mule that owner Charlie O. Finley had travel with the team.

No one understands him but his woman: Hershberger's successor at the right field position for A's was Reggie Jackson in 1968. Nine years later, Hershberger was a spectator in the upper deck of Yankee Stadium when Jackson hit his three home runs in Game 6 of the World Series. 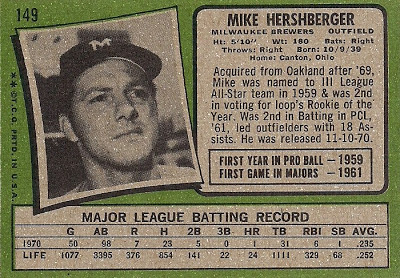