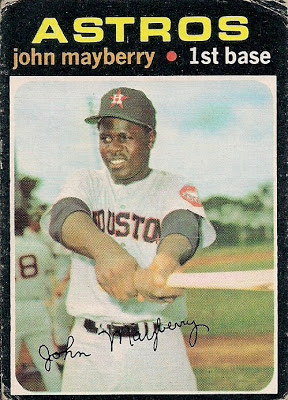 Who is the man: John Mayberry received his first extended stay in the major leagues in 1970, playing in 50 games. He struggled at the plate, hitting .216. That would be the theme of his career with the Astros.

Can ya dig it: The little guy behind Mayberry is almost definitely Joe Morgan. Morgan wore No. 18 for most of his time with the Astros, and that appears to be the edge of a "1" next to the "8."

Right on: This is Mayberry's first solo card. He appears on a two-player rookie card in the 1970 set with someone named Bob Watkins.

You see this cat Mayberry is a bad mother: When Mayberry retired, he owned the single-season home run marks for two organizations, the Royals and the Blue Jays.

Shut your mouth: Mayberry was part of one of the two worst trades in Astros history, and the trades were connected as they came within three days of each other. On Nov. 29, the Astros traded Morgan to the Reds and obtained first baseman Lee May in the deal. With May on the team, Mayberry was expendable and the Astros dealt him to the Royals on December 2 for a steaming load of crap. ... I mean, Lance Clemons and Jim York.

No one understands him but his woman: Mayberry was shipped off to the Blue Jays after the 1977 season. Depending on which account you read, the transaction was attributed to Mayberry's poor play in the 1977 ALCS and manager Whitey Herzog's disappointment with him or rumors of drug use. 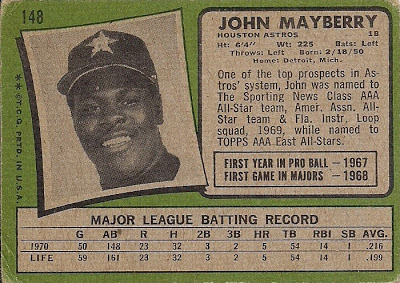 (A word about the back): The Topps AAA East All-Stars? Topps had its hand in everything, didn't they?
Posted by night owl at 12:41 AM